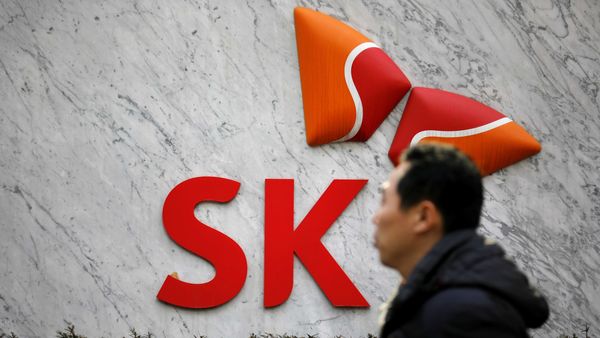 FILE PHOTO: The logo of SK Innovation is seen in front of its headquarters in Seoul, South Korea.

Construction of the plant with annual capacity of 11.7 gigawatt-hours of batteries will begin in July in the southern state of Georgia with production aimed for 2023, the firm, already building its first factory there, said in a statement.

It will make a further investment in its second U.S. factory, bringing total spending to about $1.5 billion, a company representative told Reuters, without specifying a timeframe.

The firm plans investment of 1.2 trillion won ($903 million)in its first U.S. factory, with capacity of 9.8 GWh intended to serve Volkswagen's EV base in neighbouring Tennessee, and production on track to begin in 2022.

It is also involved in a legal battle in the United States with South Korean rival LG Chem Ltd. A win for LG Chem could stop SK Innovation from importing EV batteries and components.

This month, researcher Wood Mackenzie forecast a drop of 43% this year in global sales of electric vehicles (EV), to 1.3 million units, hit by the coronavirus outbreak, lower oil prices and consumers' wait-and-see approach to purchases of new models.