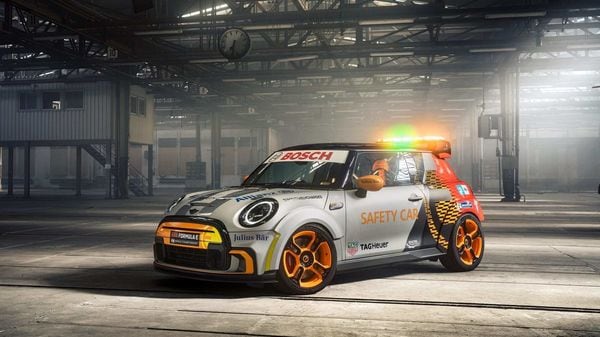 The Electric Mini safety car has received a host of special modifications for the Formula E duty.

British luxury car marquee Mini that is owned by the BMW group has entered the Formula E, however not as a competitor. A specially designed John Cooper Works electric Mini has been chosen as Formula E safety car for the For.

As the BMW group claims, the deploying electric Mini as the safety car for Formula E connects the brand's electrified future with the rich racing history of John Cooper Works. It also said that the specially designed car was produced out of the new Mini Cooper SE in collaboration between Mini Design, BMW Motorsport, FIA and Formula E.

Interestingly, this is not the first time, a BMW group car has been assigned as safety car for Formula E. Since season 1, Formula E has used the hybrid BMW i8 as its safety car. Now, the electric Mini will share the duties with the i8.

In terms of performance, the electric Mini safety car can reach 100 kmph mark from standstill position half a second faster than the stock version. The safety car can sprint 0-100 kmph in 6.7 seconds as compared to the stock model's 7.3 seconds.

BMW has already confirmed that a higher-performance electric Mini is in works. This safety car will allow the British carmaker to test technologies that will go into the upcoming higher performing model.

Talking about the safety car, Bernd Korber, Head of Mini, has said that the Mini Electric Pacesetter inspired by JCW goes at least a step further and blends the performance character of the John Cooper Works brand with electric mobility. "This extreme version of the Mini Electric has been developed as the safety car for Formula E, so is clearly not intended for use on public roads. But it does reveal one of the directions we could take with the electrification of the JCW brand," Korber further added.