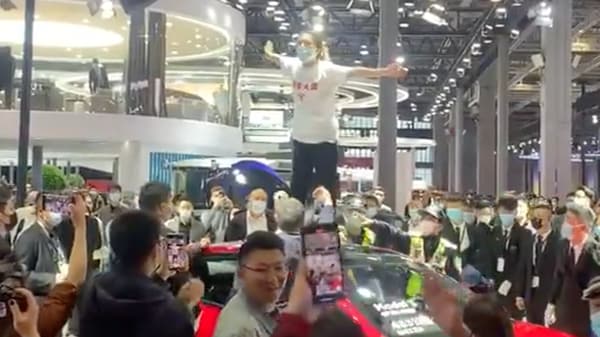 Screengrab from the video which shows a woman on top of a Tesla Model 3 at the Shanghai Auto Show. (Photo courtesy: Twitter/globaltimesnews)

Tesla is running through a rough patch over its Autopilot feature in its electric cars. The feature has its share of controversy after several crashes have led to investigations, questioning its efficacy.

But what happened at the Shanghai Auto Show on Monday was not only bad press, but also a bit embarrassing for the world's largest electric vehicle manufacturer. A woman, one of the Tesla Model 3 owners in China, was seen standing atop a Model 3 car at the event in protests against faulty brakes in her car.

Videos of her protest went viral on social media as she shouted "Tesla brake lost control" while visitors and organisers stood watching her. Even the t-shirt she is seen wearing has 'Brake Lost Control' in Cantonese. The security guards at the event tried to pull her down, hide her message with umbrellas, but she managed to push them away.

A female Tesla owner climbed on top of a car’s roof at the Tesla booth to protest her car’s brake malfunction at the Shanghai auto show Monday. The booth beefed up its security after the incident. pic.twitter.com/ct7RmF1agM

She was later dragged down from the Tesla Model 3 car's roof and escorted away. It is still not clear whether she was arrested or penalised for the protest she did.

The woman claims that the Model 3 she owns has been fitted with faulty brakes. She even claimed that the faulty brakes even led to an accident which could have caused death for at least four of her family members. Tesla denied the claims, saying it did not found any such issues with her car when it was checked. Tesla also claimed that the woman 'is widely known for having repeatedly protested against Tesla’s brake issue'.

FOR THE LOVE OF GOD SOMEONE TRANSLATE WHAT SHE IS SAYING!!!
pic.twitter.com/eSf09y0f7m

Whatever the truth, the protest comes at a time when Tesla is facing yet another controversy after a Model S car crashed in Texas last weekend killing two people. According to the police, the Tesla Model S did not have a driver behind the wheels when it crashed. It was the 28th crash involving a Tesla car in the US which will now be investigated by the National Highway Traffic Safety Administration (NHTSA).

Though Tesla has denied any technical failures at this point, the accident happened a few hours after its CEO Elon Musk claimed that a Tesla with Autopilot engaged is now approaching a “10 times lower" chance of an accident than an average vehicle.