The vehicles, including a private bus with passengers on board, collided due to reduced visibility amid slight fog in the morning hours, according to the police.
By :
| Updated on: 13 Feb 2021, 05:26 PM 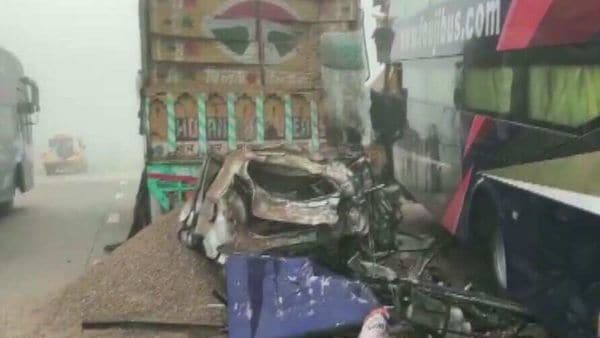 Several vehicles collided with each other on a stretch of Yamuna Expressway, reportedly due to low visibility. (Photo courtesy: ANI)

Around a dozen people were injured in a multi-vehicle pile-up on the Yamuna Expressway in Greater Noida on Saturday morning, police said.

The vehicles, including a private bus with passengers on board, collided due to reduced visibility amid slight fog in the morning hours in the Dankaur area, they said.

"A truck registered in Rajasthan was parked along the expressway when the bus came and rammed onto it from behind. A couple of cars and another bus that followed also added to the pile-up," a police spokesperson said.

"Around 12 people who were on board the first bus that hit the stationary truck got injured and have been sent to hospitals for medical treatment," he said.

The police said the damaged vehicles were later removed from the expressway and normal traffic movement resumed on the stretch.