While Trump seemingly lumped all auto companies together in his tweet, his fuel standards initiative has fractured the industry.
By : Bloomberg
| Updated on: 01 Apr 2020, 08:38 AM 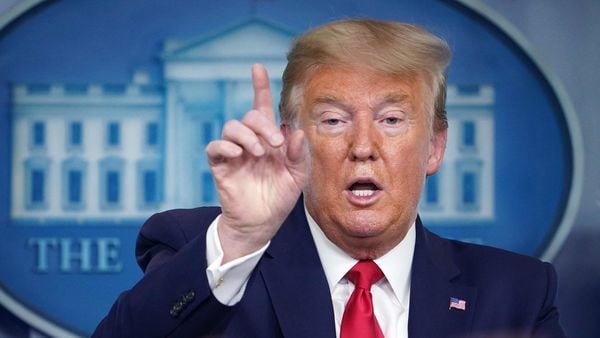 President Donald Trump attacked automakers for the second time in a matter of days, chiding their “foolish executives" as his administration completed the final step of a three-year quest to dismantle Obama-era fuel efficiency rules.

Days after demanding that General Motors Co. and Ford Motor Co. make ventilators, Trump claimed that unidentified company leaders were being “politically correct" by not endorsing his efforts to ease gas mileage and emissions regulations for automobiles, a move that has enraged environmentalists and sparked courtroom battles.

Last week, the president took Detroit -- and particularly GM and its Chief Executive Officer Mary Barra -- to task for moving too slowly to build breathing devices for coronavirus victims. Shortly after Trump sent a set of angry tweets, the company announced a deal to partner with a ventilator maker and start production within weeks -- with or without the federal contract they had been seeking.

The back-to-back critiques are coming from a president who billed himself as a champion of the industry and welcomed Detroit’s CEOs to the White House within days of his inauguration. He delivered Tuesday on a vow to relax regulations he said were too burdensome by requiring the industry to boost new car fuel efficiency by 1.5% per year through 2026. The previous mandate required improvements of roughly 5% annually.

While Trump seemingly lumped all auto companies together in his tweet, his fuel standards initiative has fractured the industry.

“We remain committed to meeting emission reductions consistent with the California framework and continue to believe this path is what’s best for our customers, the environment and the short- and long-term health of the auto industry," Bob Holycross, Ford’s vice president of sustainability, environment and safety engineering, said in a statement.

John Bozzella, president of the Alliance for Automotive Innovation, which represents almost all major carmakers, said that the industry has consistently called for year-over-year fuel economy and greenhouse gas improvements.

“We also recognize that the standards that were put in place 10 years ago or so are no longer appropriate in light of shifting market conditions and consumer preferences," Bozzella said.

Last month, the Justice Department abandoned an antitrust investigation into the automakers that entered into the agreement with California. That probe was called out by the state’s’ governor, Gavin Newsome, who said it was “a blatant attempt by the Trump administration to prevent more automakers from joining California and agreeing to stronger emission standards."

The effort to revise fuel economy standards has sparked a furious response by consumer and environmental advocates, who accused Trump’s administration of obliterating the most effective policy ever enacted to reduce greenhouse gas emissions linked to climate change.

The new rule is “a deliberate decision to steer us at high speed toward a more dangerous climate," said Ken Kimmell, president of the Union of Concerned Scientists. “It also cedes American leadership in vehicle manufacturing, putting the automakers at risk in a global market."

The initiative has been marked by tumult and repeated delays amid criticism from academics, environmental groups and even the Environmental Protection Agency’s own science advisers, who said the move to weaken the standards was underpinned by shoddy analysis.

Under the new requirements, 2026 model-year fleet cars, trucks and SUVs will average roughly 40 miles per gallon as opposed to closer to 47 mpg under the previous standards.

“As we have done numerous times over the last three years, today’s announcement again delivers on President Trump’s promise to remove and replace undue -- and in this case, unrealistic -- regulatory burdens," EPA Administrator Andrew Wheeler said in statement.

Wheeler said the new standards would save lives and money, while giving motorists more choice with regard to the cars they drive. He blamed the previous standards for driving up new-vehicle costs and pushing Americans to hold on to older, less-safe cars longer.

Because the standards set a floor, not a ceiling, on fuel economy, consumers still have the choice to buy hybrids, electric vehicles or other highly efficient vehicles, said James Owens, acting head of the National Highway Traffic Safety Administration. “American families can’t get the benefits of safety and better environmental standards of new vehicles if they can’t afford the sticker price in the first place," he said.

Federal agencies completed a critical piece of the Trump administration plan last year: a rule stripping California of its power to set limits on auto emissions of greenhouse gases that are stricter than those of the national government and encourage electric vehicles.

White House officials had been considering the move as early as February 2017, before Trump announced in front of a gathering of auto workers near Detroit that his administration would re-evaluate the standards brokered by former President Barack Obama, automakers and California officials.

California and environmental groups have challenged last year’s move against the state and litigation is still underway. California Attorney General Xavier Becerra on Tuesday threatened more to come, calling the measure “an unlawful attempt to change our clean-car standards" that runs afoul of the Clean Air Act.

“The federal government should be in the business of applying this law rather than violating it," Becerra said.

Environmental groups also vowed to fight the plan in court, arguing the final regulation violates federal law requiring the government to set fuel economy standards at the maximum feasible level. Automakers are already producing electric vehicles that don’t generate tailpipe emissions, which they say proves the standards could have been made tougher, rather than weakened.

The final rule responds to some automakers’ concerns by largely preserving existing flexibilities baked into the Obama-era program, including allowing companies to claim credit for improvements to vehicle air-conditioning systems. The EPA also opted to extend an existing incentive for electric vehicles, instead of eliminating it as some conservatives had hoped. However, the administration is also taking action to propel natural gas vehicles by effectively giving them extra credit under the program.

Some conservatives who had argued for wiping the standards away altogether still rallied behind the final result. The final plan is “pretty meaty," said Tom Pyle, head of the American Energy Alliance. “They’re not freezing" the standards, and instead “it’s a reduction of the wildly unachievable rule that the previous administration rushed through."