Daimler and Volvo Trucks have partnered to form a joint venture to develop fuel-cell systems meant to convert hydrogen to electricity to power the long-distance trucks.
By : HT Auto Desk
| Updated on: 27 May 2021, 03:33 PM 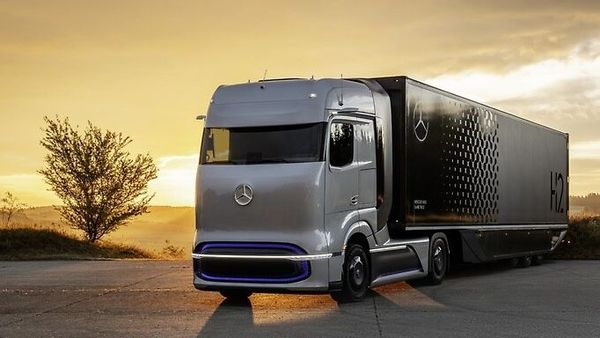 Daimler is planning to sell hydrogen-fueled long-haul trucks by 2027 that will be cheaper to buy and operate than diesel-powered trucks. (Image: Daimler)

Several car manufacturers around the world have already stepped into the hydrogen fuel cell technology arena, and now it seems to be the truck manufacturers' turn. Daimler, the largest manufacturer of heavy trucks has announced that it would convert its large freightliners into zero-emission vehicles within the next 15 years, in an attempt to reduce its tailpipe emission.

(Also read: Hyundai all set to up hydrogen game as new trucks roll into Europe)

However, Daimler Trucks is not taking the most popular route to explore zero-emission mobility, which is the electric powertrains. Instead, the German CV maker is mulling the usage of hydrogen fuel cell technology. Daimler argues that a battery-electric powertrain is not ideal for long-haul 18-wheelers, as the weight of the batteries alone subtracts too much from payload capacity, an important factor for cost-conscious trucking companies.

Fuel cell technology for large trucks is nothing new though, as apart from Daimler some other truck manufacturers too are mulling the same plan. Just like the battery-electric powertrain technology, fuel cells also produce no tailpipe emissions. Besides that, the hydrogen fuel tanks can be refilled as fast as diesel tanks, which is an advantage compared to the batteries that take a significantly long time to recharge.

Daimler has started testing a prototype GenH2 long-haul truck powered by the hydrogen fuel cell and capable of going 965 km without refuelling. However, a lot more developments are to done to reduce the cost of equipment. The company is now planning to sell hydrogen-fueled long-haul trucks by 2027 that will be cheaper to buy and operate than diesel-powered trucks.

Daimler has partnered with Shell to build a hydrogen corridor of fueling stations across northern Europe to support its lang haulers that will powered by hydrogen fuel cells. For shorter-haul trucks, Daimler has joined hands with Chinese company CATL to develop batteries.

Also, in March 2020, Daimler and Volvo Trucks partnered to form a joint venture to develop fuel-cell systems meant to convert hydrogen to electricity to power the long-distance trucks.