Mercedes-Benz’s upcoming electric cars and refreshed S-Class and C-Class models will show its shift toward more upscale vehicles packed with sophisticated gadgetry is picking up speed.
By : Bloomberg
| Updated on: 15 Feb 2021, 01:23 PM 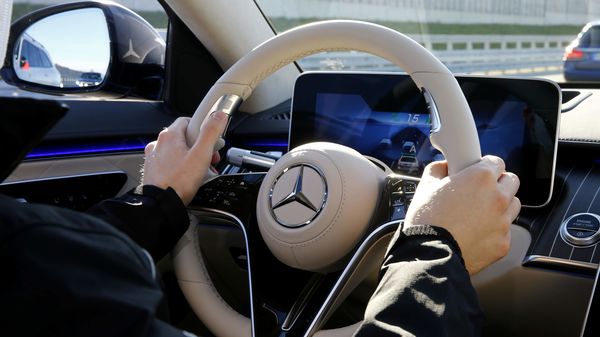 An employee of Daimler steers a new Mercedes-Benz S-Class limousine at the company's test center near Immendingen, Germany.

Now that Daimler AG has been rewarded a share-price bump for embracing a breakup that investors long desired, it’s intensifying efforts to improve returns and keep the market-value momentum going.

The spinoff of Daimler Truck announced earlier this month was a historic step toward abandoning the conglomerate structure that’s been weighing on the German manufacturer’s valuation for years.

Mercedes-Benz’s upcoming electric cars and refreshed S-Class and C-Class models will show its shift toward more upscale vehicles packed with sophisticated gadgetry is picking up speed, Chief Executive Officer Ola Kallenius and Chief Financial Officer Harald Wilhelm said in a joint interview. Daimler Truck also has all it takes to compete in the global industrials sector, they said.

“We will make the gradient steeper," Kallenius said of Daimler’s push for profit-margin improvement. The enormous valuations investors are assigning to luxury-goods manufacturers and technology firms show that “there is a lot of potential in the market, and now it’s up to us to perform."

While the executives didn’t refer to other companies by name, two small-volume players in the auto industry are the envy of others: Tesla Inc., which delivered just half a million cars last year but boasts a $783 billion market capitalization, and Ferrari NV, which shipped just over 9,100 units and is worth almost $40 billion.

Daimler shares surged to their highest since May 2018 after management unveiled their spinoff plan earlier this month. Other German industrial conglomerates have had mixed success trying to streamline their operations to better compete in a rapidly changing environment where software and data play increasingly important roles. Siemens AG has been a success story, while Daimler’s larger rival Volkswagen AG has struggled to push through structural changes. Thyssenkrupp AG’s woes have underscored the risks of moving too slowly to revamp operations. 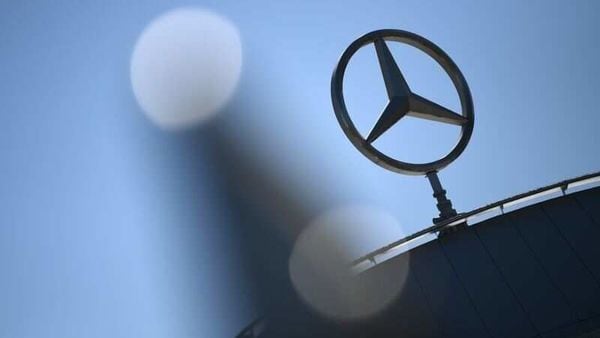 Daimler traces its roots to the inventors of the automobile. In 1886, Carl Benz registered a patent for his gas-powered vehicle, while Gottlieb Daimler separately engineered a motorized carriage. Both entrepreneurs pursued development of passenger cars and commercial vehicles. The latter was always the smaller business, but it gradually expanded into a second industrial pillar with sizable industrial sway. Deutsche Bank AG helped broker the merger into Daimler-Benz AG in 1926.

Auto executives the world over are now predicting an era of tumult for the industry largely driven by the rise of increasingly complex software and demise of the internal-combustion engine. Mercedes is still getting its electric-car push off the ground, with the EQC SUV having a bumpy start while Tesla pulled away last year to became the world’s most valuable automaker by far.

Mercedes recently added the compact EQA and will introduce an all-electric sibling of its flagship S-Class sedan, dubbed EQS, later this year. It will be the first Mercedes based on dedicated electric-car underpinnings that will be vital for the brand’s focus on larger luxury cars that reap higher returns than compact models.

Cutting fixed costs, capital expenditures and research-and-development spending by more than 20% by 2025 should free up funds Mercedes plans to plow into future technologies, including boosting its software operations. Kallenius said he remains “open minded" about cooperations beyond an existing collaboration with Nvidia Corp., but insisted Mercedes won’t cede control of software functions that are critical for future vehicles.

While Kallenius said Daimler’s truck division, the world’s largest producer of heavy-duty vehicles, is “a healthy business," he acknowledged its European and Brazilian operations “have potential to improve their performance." The unit generates the bulk of its profits from its North American operations, but its margins lag behind rival Volvo AB and smaller, more specialized peer Paccar Inc.

“A clear governance is what matters" at the truck division, regardless of the exact size of the minority stake Mercedes retains after the spinoff, Wilhelm said. He anticipates “a broad shareholder base with a significant share of Anglo-Saxon investors."

Kallenius and Wilhelm declined to discuss specific feedback on the spinoff plan from Daimler’s key shareholders, which are led by Chinese billionaire Li Shufu, the Kuwait Investment Authority and BAIC Motor Group.

“Our major shareholders support our plan," Kallenius said. “Regardless of where they sit."