Carmakers just about everywhere have halted their own production lines due to the spread of the coronavirus and the lockdowns on activity that have followed in its wake.
By : Reuters
| Updated on: 27 Mar 2020, 07:28 PM 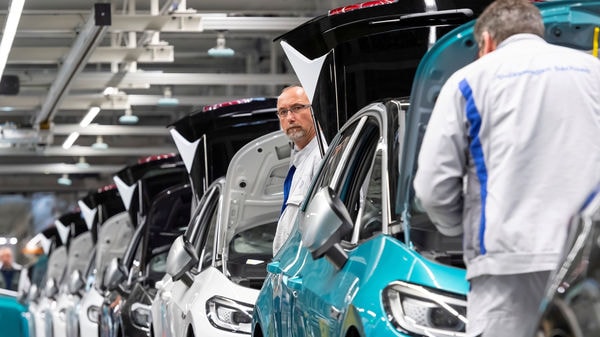 (The opinions expressed here are those of the author, a columnist for Reuters.)

France's Recylex has just announced the temporary closure of both its German lead smelter and two battery-recycling plants, one in Germany and one in France.

The decision is due to a "strong drop in demand, especially in the automotive sector, in a context of sharply lower metal prices," the company said.

It will surely not be the last lead producer to mothball its production facilities.

Lead is umbilically tied to the automotive sector. Lead-acid batteries account for around 80% of global usage of the metal.

And carmakers just about everywhere have halted their own production lines due to the spread of the coronavirus and the lockdowns on activity that have followed in its wake.

Virtually every industrial metal gets used in one form of another in making planes, trains and automobiles.

Particularly the latter. Collapsing automotive production and sales are generating a demand shock that is travelling up the value chain through parts suppliers to metals fabricators and on to metal producers such as Recylex.

Lead's dependence on carmaking activity is the highest of any metal because the metal's toxic legacy has seen it engineered out of other consumer products.

The lead-acid battery, however, remains the power source of choice for internal combustion engines. Even most electric vehicles use one for starting, lighting and ignition functions.

However, every other industrial metal has some exposure to the automotive sector.

Carmakers focus' on light-weighting to meet ever tighter environmental standards has been a core driver of aluminium usage in recent years.

Just over a quarter of global aluminium demand comes from the transport sector. The ratio is even higher in developed countries, reaching 40% in the European Union, according to the European Aluminium industry association.

A locked-down global automotive sector represents a 16 million-tonne hit to aluminium demand on an annualised basis.

Look no further to understand analysts' increasingly gloomy prognosis for the light metal. Citi, for example, is forecasting a 6% decline in consumption this year on the back of a 2.7-million tonne surplus. ("Metals Weekly", March 25, 2020).

Steel producers are similarly exposed with automotive production accounting for 12% of global usage and other forms of transport another 5%, according to the World Steel Association.

Copper goes into automotive motors, wiring, radiators, connectors and brakes. Every internal combustion engine vehicle uses around about 22.5 kg (50 lbs) of copper, while luxury cars on average contain around 1,500 copper wires totaling about 1.6 km, according to the International Copper Study Group.

Transport accounts for around 13% of global copper demand, a similar ratio, give or take a couple of percentage points, to both zinc, which is used to galvanise steel body sheet, and nickel.

Usage of metals such as copper and nickel in the automotive sector is steadily increasing on the back of growing production of hybrid and electric vehicles (EV), which need more copper for electrical circuits and more nickel as an input for lithium-ion battery technology.

But EV makers are no more insulated from the virus than their internal combustion engine rivals, with Tesla and battery partner Panasonic both slashing activity.

In terms of industrial metal markets, the automotive sector has turned from hero to zero in the space of weeks.

The demand shock emanating from the automotive sector comes in two parts.

The first is the physical closure of car assembly lines around the world.

Volkswagen, the world's largest car producer, has closed just about all of its plants and is not making any sales outside of China, according to Chief Executive Herbert Diess.

General Motors, the No. 1 U.S. automaker, is planning to keep its plants closed indefinitely and is moving into cash preservation mode.

Fiat Chrysler Automobiles NV (FCA) has suspended activity across its North American operations until next month. Ford is hoping to restart some plants, simply to generate cash.

The question, however, is whether anyone is going to buy its pick-ups anyway.

Even if production can be restarted, sales are likely to drop off a cliff-edge. The U.S. Labor Department reported an eye-watering 3.3 million of new jobless claims last week, dwarfing anything seen in the past. That's three million people whose last thought right now is buying a new car.

Car sales were already weak globally. The coronavirus will cause them to implode, a second tail-wind demand hit for metals.

Moody's is now expecting global auto sales to plunge around 14% this year, compared with a previous forecast for a 2.5% drop published in February. That's an indication of just how fast the virus is changing the automotive landscape.

Sales are expected to drop by 21% in Western Europe this year, by 15% in the United States and by 10% in China, the world's largest car market by volume.

LIGHT AT THE END OF THE TUNNEL?

Moody's holds out the prospects of a sales rebound next year, but the strength of any recovery will depend on both when the virus peaks and when consumer sentiment troughs.

One ray of light is coming from China, which saw car sales plunge 80% in February.

Car dealers in the country, which is ahead of the global coronavirus curve, are now pulling out all the stops to try and lure lockdown-weary customers back to the forecourts. The usual heavy discounts are being accompanies by novelties such as a free medical mask.

Beijing is also likely to try and engineer a recovery in a key manufacturing sector through subsidies, a path that has already been tried and tested in terms of encouraging people to buy EVs rather than traditional vehicles.

Something similar may have to come from Western governments, particularly those like Germany which also view their automotive sector as a manufacturing pillar.

Indeed, there may even be an opportunity to mimic Chinese policy by linking an automotive recovery stimulus to accelerated EV usage.

That, however, is a question for tomorrow.

Today, much of the world's car industry is closed. And that's very bad news indeed for demand for all industrial metals.