Idriverplus Technology co. startup, which develops autonomous driving technologies, has deployed fleets of robosweepers nicknamed Woxiaobai, or little white snail, that can be used for street cleaning in cities.The startup has already raised $100 million till date, all set to raise more funds.
By :
| Updated on: 23 Dec 2020, 09:55 AM 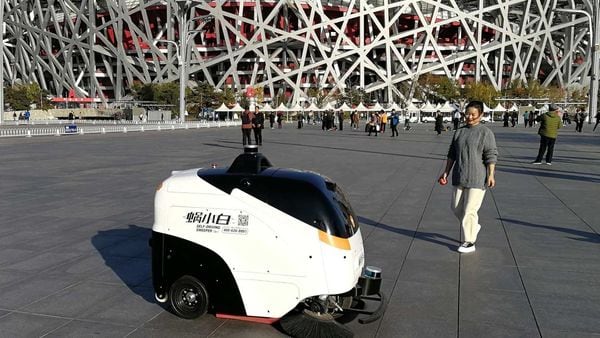 Beijing Idriverplus Technology Co. plans a fresh fundraising round in the new year and may eye an initial public offering in China, founder Zhang Dezhao said.

The five-year-old startup, which develops autonomous driving technologies, has deployed fleets of robosweepers nicknamed Woxiaobai, or little white snail, that can be used for street cleaning in cities including Beijing and Shanghai. Several hundred of the company’s autonomous fire-fighting trucks are already at work in China’s northeast and Inner Mongolia, and robotaxis will soon be trialed in Nanjing and Chongqing, Zhang said.

Idriverplus is one of scores of high-tech firms in China racing to develop technologies that will ultimately transform one of life’s most ubiquitous tasks -- driving a car. Intelligent-connected vehicles that feature some sort of automation will account for more than 50% of new car sales by 2025, according to a national technology road map laid out in November.

“The U.S. is still the best in automatic-driving algorithms, but in terms of applications, China tops all other countries" on the back of the government’s push to develop intelligent-connected cars, Zhang said.

Zhang, 36, envisions cars that will one day have the ability to connect other aspects of people’s lives outside of driving, like being able to order eggs if the fridge at home signals they’re running low, or communicating with vehicles owned by other family members. He founded the company after completing a doctorate degree at Tsinghua University that focused on autonomous driving.

Idriverplus has raised around $100 million to date, Zhang said. Investors include Baidu Inc. and JD.com Inc., according to Crunchbase.

(Also read | This tech lets trucks in China monitor if drivers slack off, speed or use phone)

“Autonomous driving vehicles will become the ultimate living space for human beings," said Zhang, adding that he expects Idriverplus to possibly break even in 2021. “The journey toward full automation is a marathon and we’re only five kilometers from the starting line."