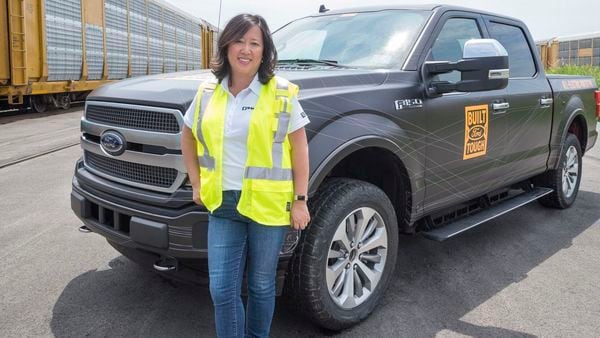 The Ford F-150 Lightning electric pickup truck is claimed to be capable of running a range of 482 km on a single charge. (Image: The Exponent)

Linda Zhang is the chief engineer behind Ford's much talked recently introduced all-electric F-150 Lightning is a Chinese immigrant who flew to the US when she was a third-grader and only knew letters A through H, which she learnt during her plane ride from China to the US.

In an interview with The Exponent, she said "I remember flying for the first time and also riding in a car for the first time, all on that trip." She said that popular TV shows played a key role in making her career decision as an automobile engineer.

As Zhang said, she used to love the car from Batman, Knight Rider etc.

She currently leads a team of hundreds of engineers who are working on the electric version of the vehicle, which is claimed to be the bestselling model in the US, the Ford F-Series. The Ford F-150 Lightning made its global debut on Wednesday night with a pure-electric powertrain, and Zhang played an important role in the whole project as the chief engineer.

In recent months, Linda Zhang and her team of engineers were extensive test drives of the Ford F-150 Lightning electric pickup truck. These tests included a high-speed test track going at 168 kmph or off-roading, slinging mud around. As Zhang said, "We have really aggressive courses, like quarter-mile of metal-edged holes or cobblestones roads, corrosion baths, rivers and off-road courses. We put the truck through its paces so our customers can have peace of mind that our trucks are durable."

Michigan Proving Grounds is spread across almost 4,000 acres of land with different landscapes to test the durability and capability of a vehicle meant to on sale. And this was for the electric variant of the vehicle that is the primary revenue generator of the Ford Motor Company.