The coronavirus is now causing production disruptions in Europe, North America and Japan, which supply crucial components to automakers in China.
By : Bloomberg
| Updated on: 16 Apr 2020, 08:27 AM 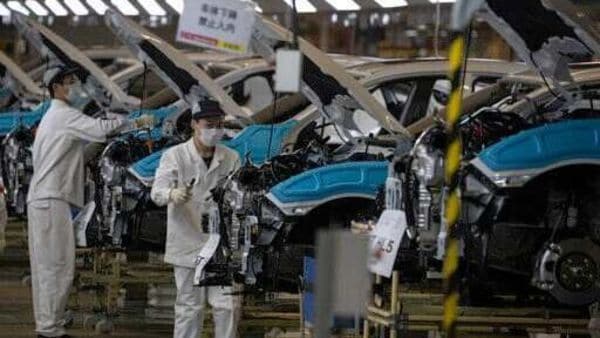 In this April 8, 2020, photo, employees work on a car assembly line at the Dongfeng Honda Automobile Co., Ltd factory in Wuhan in central China's Hubei province.

Just as China’s auto plants are recovering from shutdowns caused by the coronavirus outbreak, they are facing a new headache: potential parts shortages.

The virus is now causing production disruptions in Europe, North America and Japan, which supply crucial components to automakers in China, the industry’s biggest market. Those at risk range from global players such as Tesla Inc. and BMW AG to local contenders including Guangzhou Automobile Group Co. and Zhejiang Geely Holding Group Co., all of whom could face disruptions if the pandemic drags on.

Those fears are a reminder that economic activity in any given country is unlikely to return to normal until the outbreak is brought under control worldwide. With auto-making suspended in Europe and the Americas, glitches in China could affect the only major manufacturing region where plants are ramping up, threatening to set back the recovery of the world’s second-largest economy from a months-long paralysis.

“About two months ago, people were asking how the disruption in Chinesesupply chain would impact the global auto industry," said Stephen Dyer, Managing Director of consultancy AlixPartners. “Now it’s the reverse."

China imported $36.7 billion of vehicle components last year, with Germany, Japan and South Korea representing 28%, 27% and 6% of the total, respectively, according to China Automotive Technology and Research Center, a state-backed think tank. The U.S. ranked fourth, accounting for 5.9%.

Billionaire Li Shufu’s Geely, the top maker of Chinese-brand vehicles and owner of Volvo Cars, said a potential shortage of imported components has had a minor impact on production. That has prompted the company to seek to switch to Chinese suppliers.

Guangzhou Auto, whose partners include Toyota Motor Corp. and Fiat Chrysler Automobiles NV, said it is taking steps to ensure supply as the company imports as much as 10% of its components from overseas to assemble them in China.

While existing inventory offers some cushion, time is running out. Automakers in China typically carry about eight weeks’ supply of imported parts such as engines and chips, though for some components that can be as little as four weeks, said Xu Haidong, a vice chief engineer at the China Association of Automobile Manufacturers.

Many electronic parts in particular are imported from overseas, leaving makers of higher-end vehicles that contain a lot of software and computers vulnerable.

And while some carmakers in China say they rely close to 100% on local supplies, the made-in-China parts they buy may still contain smaller imported components, such as chips. That means virtually all carmakers could suffer supply shocks.

Take Germany’s Continental AG, which is among major parts maker to halt output across its factory network. The European giant supplies major carmakers with electronics, tires and other parts. Robert Bosch GmbH, which provides fuel-injection systems and sensors, said on March 20 it is “drastically" cutting back German operations.

Japanese component maker Yorozu Corp. suspended operations in the U.S., Mexico, India and Brazil, and is running some of its production lines in Japan, Indonesia, and Thailand. Its operations in China were halted during a government-mandated shutdown, and the company says plants in the country have now resumed 90% of their output.

BMW said in an email that it had currently secured enough key parts such but that its purchasing experts were monitoring the situation.

The situation today marks a reversal from February, when companies from Nissan Motor Co. to Hyundai Motor Co. were halting production in their respective home countries because of disruptions in China.

To be sure, no major part shortages have so far emerged in China, and component suppliers in Europe and the U.S. are preparing to re-start output in a timely fashion, CAAM’s Xu said in an online media conference on April 10. The German government has been talking with automotive companies to find a way to resume production, and industry groups in countries such as France are seeking green light to restart plants.

One factor giving carmakers some buffer is low demand, which has left manufacturers and dealerships with high inventories. Buyers are slowly returning to showrooms though: car sales in China have been recovering since February and even rose during the second week of April, according to data from China Passenger Car Association.

“Premium products that have more imported components might be under bigger threat," said Dyer at AlixPartners. “But the need for luxury cars is also affected by the coronavirus."