BAIC (Beijing Automobile Group Co Ltd) has been Daimler's main partner in China for years and operates Mercedes-Benz factories in Beijing through Beijing Benz Automotive.
By :
| Updated on: 25 Nov 2019, 06:55 PM 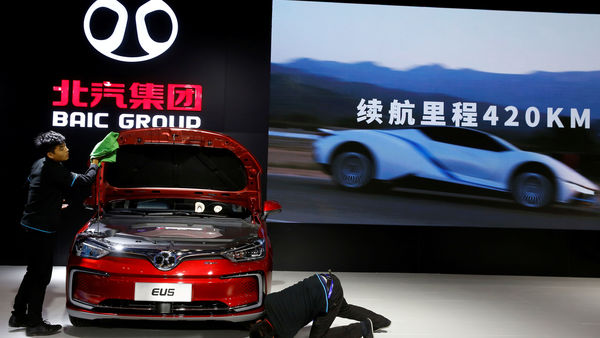 FILE PHOTO: Staff members clean a car at the stall of the BAIC Group automobile maker

Daimler's main Chinese joint venture partner BAIC Group has signalled its intention to increase its stake in the German luxury car manufacturer, sources briefed on the matter said, after it built up a 5% Daimler stake in July.

Officials at BAIC's listed company BAIC Motor Corp Ltd said at investor conferences in mid-October that "both sides are willing to increase stakes in the other", responding to questions about future relationship between BAIC Group and Daimler, the sources said.

Daimler said in a regulatory filing on Friday that HSBC held 5.23% in Daimler's voting rights directly as well as through instruments such as equity swaps as of Nov 15. BAIC has used HSBC to help it build its initial 5% stake.

Sources declined to be named as they are not allowed to speak to media. Daimler and BAIC were not immediately available for comment.

Geely, Daimler's biggest shareholder with a 9.7% stake, said: "We are a long-term investor in Daimler. We do not react spontaneously to any volatility and we support Daimler's management and their strategy."

Two months before its July stake deal was announced, sources told Reuters that BAIC wanted to invest in Daimler to secure its investment in Beijing Benz Automotive.