Tesla must deliver more than 181,600 vehicles in the last three months of the year to achieve its target of delivering half a million vehicles in Covid year itself.
By : Reuters
| Updated on: 21 Oct 2020, 07:16 AM 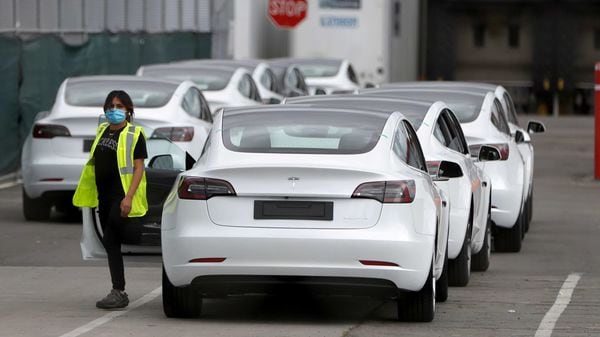 When Tesla Inc reports results for the third quarter after the bell on Wednesday, it will be the next three months, and whether Chief Executive Elon Musk can achieve the company's ambitious year-end goal, that analysts will be interested in.

The electric carmaker has stuck to its forecast of delivering half a million vehicles in 2020 despite a global pandemic and economic upheaval that has sunk most of its internal combustion rivals deep into the red.

That means Tesla must deliver more than 181,600 vehicles in the last three months of the year - a 30% increase from record third quarter deliveries of 139,300 vehicles.

While several analysts believe that goal is attainable, others see a worsening macroeconomic environment ahead.

"I'm ... cautious about demand given the recessionary environment and accelerating pace of coronavirus infections, making it tough for the company to hit its 500K car sales target for the year," said Haris Anwar, senior analyst at investing.com.

Analysts on average expect Tesla to report net income of $593 million in the third quarter on revenue of $8.4 billion, according to Refinitiv data.

Several analysts, including Frank Schwope at Nord/LB, believe the positive numbers are due to regulatory credits - payments Tesla receives from other carmakers to offset their emissions.

With recovery in the United States sluggish and Europe struggling with a second bout of the virus outbreak, Tesla analysts had pinned their hopes for growth on China, which has begun to recover as consumers shake off the pandemic's effects.

Goldman Sachs analysts said in a note they hoped Tesla would provide investors with more details on Wednesday about the Chinese market and which countries compensated for lackluster demand in the world's second-largest economy.

Tesla plans to ramp up production over the coming years by expanding output at its Shanghai plant to 250,000 vehicles a year, including its crossover Model Y.

It is also building new vehicle and battery factories near Berlin, Germany, and Austin, Texas.