Bugatti Bolide has been voted as the world's most beautiful hypercar at the 36th Festival Automobile International in Paris.Bugatti Bolide's production will be limited to only 40 units.
By : HT Auto Desk
| Updated on: 05 Oct 2021, 02:26 PM 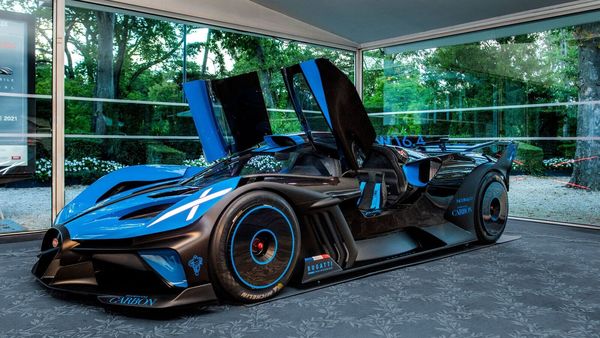 Bugatti Bolide has been voted as the world's most beautiful hypercar in the Hypercars category at the 36th Festival Automobile International in Paris. Bugatti revealed this hypercar last year as a concept model.

Bugatti's engineers and designers have designed the Bolide hypercar to be the lightest and track-focused vehicle. The company used its W16 quad-turbocharged engine in this vehicle which makes it a highly performance-oriented car. It also shares the same platform as the brand's popular model, Bugatti Chiron.

Bugatti will produce only 40 units of the Bolide hypercar over the next three years, with the first deliveries scheduled for 2024. The luxury automaker informed that very few changes, technically or visually, compared with award-winning design will be made to the production models. Bugatti design head of special projects Nils Sajonz conveyed that Bolide's creation was inspired by the weight-to-power philosophy of Ettore Bugatti, founder of Bugatti. “Bolide is the ultimate culmination of that philosophy, pure in its design and its purpose," he stated.

(Also read | This is the last Bugatti Divo in the world, wrapped in blue inspired by EB110)

The 40 units of Bugatti Bolide will be priced at four million euros each that is approximately ₹34.5 crores.

Bugatti design director Achim Anscheidt shared that Bolide brought a challenge of a different kind to the designing team. “Bolide was an entirely different challenge for our design team, and a kind of mental experiment where we stripped the car back to its W16 quad-turbocharged heart and rebuild it with the bare minimum to create the most extreme Bugatti yet. The key for us was to respect the technical requirements of Bolide, focusing first on the function and only then developing the form," he added.