Home Auto News Bikes, Not Cars, Show The Way As Europe Limps Back To Life After Covid 19

Bikes, not cars, show the way as Europe limps back to life after Covid-19

Touted as being compatible with social distancing norms, cycling is being promoted in a big way in several European cities.
By : Bloomberg
| Updated on: 27 Apr 2020, 08:43 AM 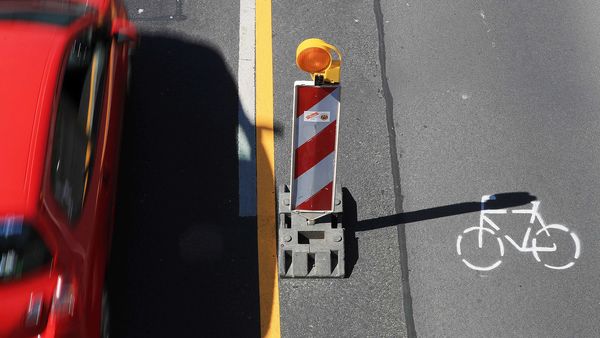 An automobile drives beside a recently painted yellow bike lane marking in a repurposed section of road as Germany installs pop-up cycle lanes to aid social distancing in transport systems.

As European nations prepare to emerge from lockdowns, authorities from Paris to Milan are looking to bicycles to get city dwellers moving again without inflaming the coronavirus pandemic.The French ecology ministry asked a group that promotes the use of bikes to help local officials coordinate the creation of temporary cycling paths. In Berlin, authorities have already added several miles of pop-up lanes to encourage social distancing. Milan plans to open up more streets for cycling and walking.Pedal power has fresh appeal because it can help the population get back to work without forcing everyone onto crowded buses and trains, where the virus would be more likely to spread. In an acknowledgment of the risks, French Prime Minister Edouard Philippe has said that masks could become mandatory on public transport.

(Also read: Bikes vs coronavirus - Why this city is promoting cycles to beat Covid-19)

Cycling is ecologically friendly and compatible with social distancing, the French biking group, Club des Villes et Territoires Cyclables, said on its website. That’s especially important “at a time when apprehension over taking public transport is likely to persist well beyond the end of the lockdown," it said.Public transport remains open in France, with reduced service, for those who have to commute to work or make other essential trips. An eight-week strike that began last December against President Emmanuel Macron’s flagship pension overhaul had already motivated more people to take up cycling out of necessity.

(Also read: Why closing select roads in Indian cities to cars may not help in Covid-19 fight)

A proliferation of bike-sharing options and a years-long effort to build cycling lanes across Paris and other French cities have also made it easier for citizens to commute on two wheels.

“At this stage, we are talking about temporary bike lanes, set up by local authorities," said the ecology ministry’s spokesman. The longer-term plan to develop cycling paths is continuing, he said.

Milan will make 35 kilometers (22 miles) of city streets more accessible to bikers and walkers in the coming months, making it safer and easier for commuters to avoid public transport — and traffic jams — once the lockdown is lifted.

Germany, one of the more car-centric nations in Europe with its famously free-wheeling Autobahn highways, is also upgrading bike infrastructure because of the coronavirus. The state of Baden-Wuerttemberg, home to car giant Daimler AG, is roughly doubling its funding for bike and walking lanes this year to 58 million euros ($63 million). The Deutsche Umwelthilfe environmental lobby has asked authorities in more than 200 German cities to bolster bike paths to unclog buses and subways.

“Bikers need safe infrastructure in the coming months," the group said in a statement. “It allows for a safe journey to the office with sufficient distance and fresh air, and helps doctors and hospitals by avoiding unnecessary accidents."