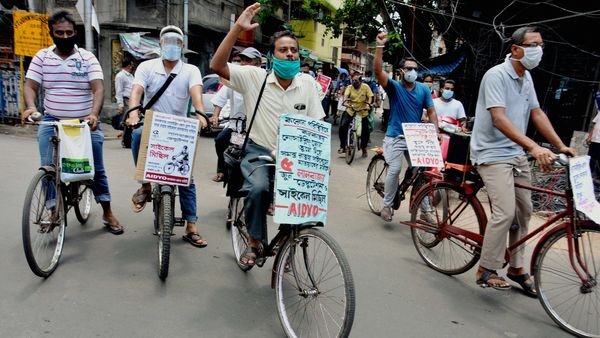 File photo: Members of All India Democratic Youth Organisation (AIDYO) participate in a cycle rally, demanding the removal of 'No Cycling Zone' and permit environment friendly cycling on every road, on the occasion of World Environment Day, in Kolkata, Friday, June 5, 2020.

A day after Chief Minister Mamata Banerjee asked Kolkata Police to allow bicycles along certain public thoroughfares of the city due to paucity of public transport during the lockdown, a notification was issued on Tuesday allowing movement of the long-trusted two-wheeler along its lanes and by-lanes.

The notification, signed by the city commissioner of police Anuj Sharma, said in view of the restrictions imposed on public transport during the lockdown, bicycles are being allowed in the lanes, bylanes in Kolkata Police area.

"However restrictions will continue on the main arterial roads, flyovers and any other area as notified from time to time," it said.

The cyclists should obey one way restrictions and other traffic rules, the notification which will be in force till July 30 said.

Deputy Commissioner, Traffic, Rupesh Kumar had said earlier that the security aspect will be given priority.

Several members of Cycle Samaj, an organisation of bicycle enthusiasts in the city, had mixed reactions to the government's announcement.

"When was cycling in lanes by-lanes banned? This order has practically nothing new to offer as there is no word on lifting the ban on cycling along main roads and flyovers," Abhijit Nandy and Abhirup Basu, two members, posted on social media.

Two other members S Darani and Archi Mitra expressed their happiness. The organisation did not give any official response.

With fewer private buses and inadequate number of state buses on the roads and local trains and Metro railway suspended due to the lockdown, commuters faced considerable difficulty to reach their workplaces. Private and government offices opened in the state on June 8.