While Hyundai Creta continues to extend its gap with Kia Seltos in the mid-size segment, Venue SUV has overtaken Maruti's Vitara Brezza by a small margin in April.
By : HT Auto Desk
| Updated on: 04 May 2021, 11:54 AM 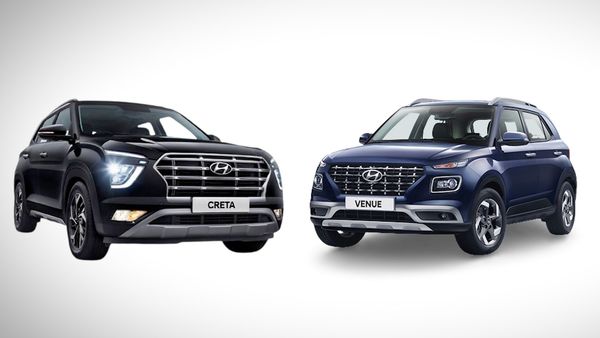 Hyundai Creta and Venue SUVs have emerged as top choices for their respective segments in April.

If Maruti remains the king among carmakers for its hatchbacks, Hyundai is emerging as the more popular brand when it comes to buying an SUV. After quite some time two Hyundai SUVs have emerged as the top choices in their respective segments. Hyundai Creta and Venue SUVs became the leaders in the mid-size and sub-compact SUV segments in April after the sales figures emerged.

Hyundai Creta SUV, which has been the Korean carmaker's most popular offering in India for the past one year, saw a slight drop in sales last month. Despite the ongoing Covid-19 crisis, Hyundai managed to sell 12,463 units of Creta SUV in April, compared to 12,640 units it sold in March this year.

Since its launch in March last year, just before India went into a lockdown due to the Covid-19 pandemic, Hyundai has managed to sell more than 1.21 lakh Creta SUVs. The good run continues for Creta SUV despite Hyundai increasing its price recently. In the latest hike, Hyundai has increased the price of Creta SUV across most of the variants. This is the third time that Creta SUV prices have been hiked, and the second instance this year.

Meanwhile, Hyundai's other popular offering Venue has emerged as the top choice in the sub-compact SUV segment in April. Hyundai sold 11,245 units of this small SUV last month, against 10,722 units it could sell in March this year. The sub-compact SUV barely managed to go past its rival Maruti Suzuki Vitara Brezza's sales figures by just 25 units. Brezza has been the top choice in the segment for quite some time, but Venue SUV seems to be catching up fast on it.

In January too, Venue had emerged as the best-selling sub-compact SUV in India. Venue SUV's success will be sweeter for the Korean carmaker as the segment, overcrowded with variety of choices, is one of the most popular and growing in the country. Besides Maruti Suzuki Vitara Brezza, Venue competes with other SUVs like Kia Sonet, Tata Nexon, Mahindra XUV300, Nissan Magnite and Renault Kiger.