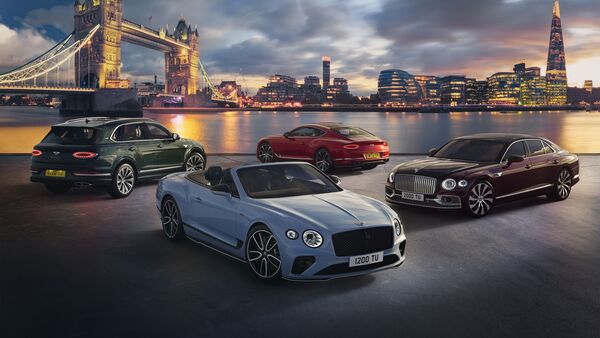 Bentley informed the 80 cars of this collection will be sold exclusively in China in the coming months.

Bentley Mulliner created a collection of new cars to celebrate the 20th anniversary of the brand's presence in China. Bentley shared that each of the four special anniversary models has been inspired by a famous location in London.

Bentley has applied their exclusive design ideas to the Continental GT, Continental GTC, Flying Spur and Bentayga to create four categories of cars. The ultra-premium automaker shared that each of these models gets numbered from one to 20 to reflect the exclusivity of this range. These four exclusive models have been named the Guard, the Carnaby, the Pall Mall and the Savile Row.

The first car in the collection is called the Guard which is inspired by the famous Royal Guards who protect the Royal Household. The model has been painted with St James Red pearlescent paint and the Beluga roof mimics the red tunic and 18" black bearskin hats worn by the guards. The car sits on 21-inch ten-spoke wheels that have been painted black and with a bright machined finish. The convertible model in the collection is called Carnaby which is based on Carnaby Street in London’s Soho district. Bentley said this model will be available in four different colours, Radium, Jetstream II, Orange Flame and Onyx.

The model called Pall Mall Flying Spur is Bentley's homage to the State Limousine and it features a bespoke duo-tone Beluga over Claret paint. It sits on 22-inch ten-spoke wheels in a claret-painted with a bright-machined finish. The last car in the collection is the Savile Row which is a Bentley Bentayga which comes with Cumbrian Green bodywork and sits on 22-inch ten-spoke wheels.

Bentley informed the 80 cars of this collection will be sold exclusively in China in the coming months and the first examples will make their global debut in China shortly.