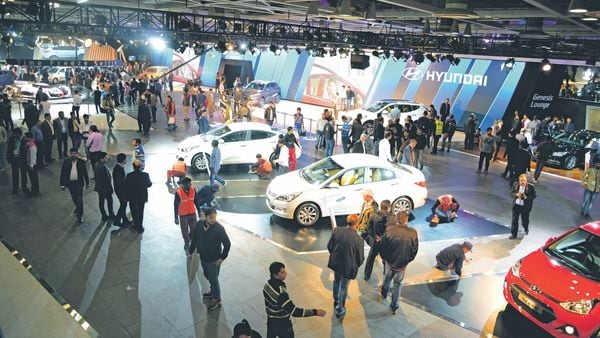 A file photo of the Auto Expo. Lobby group Siam has also asked the firms to think of ways to collaborate with it for the event.

In its first such outreach, the lobby group has also asked the companies to think of ways to collaborate with it for the event.

The companies, all of which are in various stages of building connected car technologies, are yet to respond to the invite, the people said, requesting anonymity.

The move to partner with telcos comes amid the year-long slowdown in the auto industry, which has prompted top manufacturers, including Toyota Kirloskar Motors Pvt. Ltd, Honda Cars India Ltd, TVS Motor Co. Ltd, Hero MotoCorp Ltd and Honda Motorcycle and Scooter India Ltd, deciding to skip the biennial event to save costs.

According to the first person, Siam’s move indicates that auto shows were no longer just about launching vehicles, but about displaying the technologies on offer.

“Connected car technology is going to be an essential part of the automobile industry going forward and is evolving rapidly. Hence, Siam has approached them, but the companies have not yet confirmed their participation for the event. This is for the first time Siam has approached so many players from another sector for the Expo," he added.

Huawei, which is facing global scrutiny over 5G network security concerns, has already made significant strides with connected car technologies.

In July 2018, Huawei and Audi had signed a memorandum of understanding on strategic cooperation in Berlin to jointly develop intelligent connected vehicles. Subsequently in October the same year, Huawei and Audi showcased their plans for such vehicles at a Shanghai event, which featured the new Audi Q7 with its state-of-the-art technology.

At the India Mobile Congress in October, Bharti Airtel showcased a connected car, MG Motor’s Hector, which is powered by Airtel’s connectivity suite.

Likewise, Vodafone Idea and Korean automobile company Kia Motors signed a partnership in October for the India debut of the UVO connected car system with the new Kia Seltos.

Simply put, a connected car has seamless connectivity to the internet which enables a host of features for easier and safer driving experience.