Easing of lockdown restrictions in several countries recently resulted in deserted streets once again buzzing with traffic movement.AQI levels in several Chinese cities are back to 2019 levels. In Shanghai, NO2 levels are even worse than last year.Indian cities are also reporting worsening AQI.
By : HT Auto Desk
| Written By : Shubhodeep Chakravarty
| Updated on: 05 Jun 2020, 13:01 PM 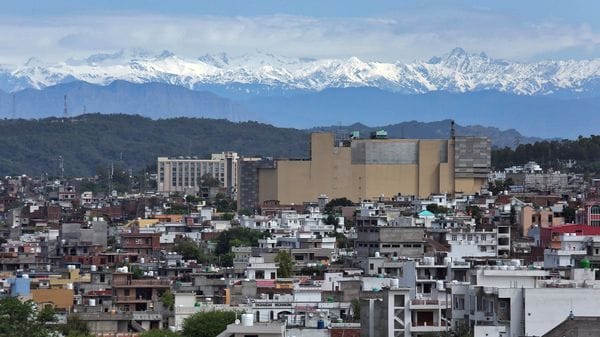 The snow-covered Pir Panjal mountain range is seen from a residential area after air pollution levels started to drop during a nationwide lockdown to slow the spreading of coronavirus disease (COVID-19), in Jammu May 3, 2020.

Air pollution levels in several major cities around the world have once again started rising after weeks of lockdown ensured that there was a very visible respite. Cities in China, across Europe and even in India have started showing signs that the Air Quality Index (AQI) is all set to worsen once again which could potentially exacerbate health conditions among people at large and Covid-19 patients in particular.

Easing of lockdown restrictions in several countries recently resulted in deserted streets once again buzzing with traffic movement. And while vehicular pollution is only one factor of many that affects air quality, it is a key factor. The other major contributors are factories, especially those that burn coal for generating electricity. Take China for instance. Guardian recently reported that data from Centre for Research on Energy and Clean Air (Crea) has revealed PM 2.5 and NO2 levels across the country are now back to levels from a year earlier. In Shanghai, NO2 levels are even higher than last year. Analysts at Crea believe that this can be majorly blamed on high-polluting industries restarting operations quicker than other industries.

And while China was one of the first countries to restart journey on the path of economic recovery, European countries are now gradually returning to work as well.

It may bode well for the economies but not for the environment. Experts and analysts feel that while an immediate spike in pollution in cities like London, Paris and Barcelona is unlikely, it is also unlikely that AQI seen at the height of Covid-19 outbreak are also unlikely to be maintained. In the UK, in particular, people have hit the roads in significant numbers over the past two weekends to make the most of warm weather after being cooped up at homes. This may have already had an impact on AQI levels in several cities.

When it comes to alarming AQI levels, several Indian cities figure prominently. Delhi has made headlines time and time again for its toxic air quality, especially in the winter months. Over the course of April and May, however, blue skies interspersed with white clouds gave a visual representation of how air pollution levels had dropped. Monitoring stations showed PM 2.5 levels were in double digits which broadly falls in 'satisfactory' level. This was true to some extent for a number of other cities in the country infamous for high pollution levels too.

From 'satisfactory', the monitoring stations are now once showing AQI levels are moving towards 'unhealthy'. On Friday morning - at 0900hrs, seeral AQICN-tracked monitoring stations in Delhi were firmly in the red. Adjoining Noida was only marginally better. Gurugram fared a lot better with an AQI reading of 78.

As India looks at resuming economic activities and more and more people once again hit the roads, it is almost a given that pollution levels will once again climb. Environmentalists however hope that authorities are able to take some cues from lockdown days of April and May, and address the very clear and real threat to people.