The incident took place at Turbhe MIDC area of Navi Mumbai earlier this week.BMW officials will carry out an audit to estimate the extent of damage.
By : HT Auto Desk
| Updated on: 10 Dec 2021, 04:10 PM 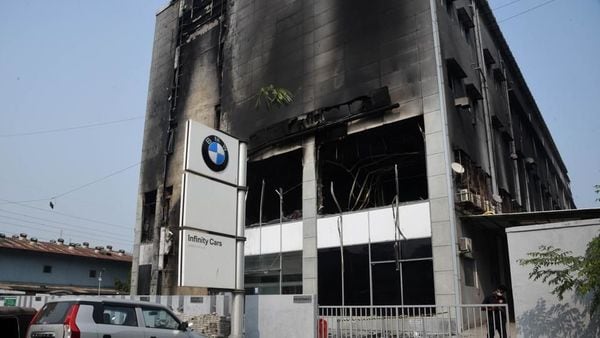 The security officials of the BMW service centre spotted the fire on the first floor.

At least 40 BMW cars were charred and a few more were damaged after a BMW service centre located in Turbhe MIDC area of Navi Mumbai the caught fire that raged over seven hours. The incident took place earlier this week and no casualty has been reported regarding it. Chief Fire Officer, MIDC fire services, RB Patil shared that the blaze in the BMW showroom started in wee hours of Tuesday morning. The fire was brought under control around 1 pm, however, by then more than 40 BMW luxury cars were totally charred in the fire.

Patil informed that the fire was tackled with the help of 10 fire engines. Officials have also shared that though there is no serious injuries or fatality due to the incident, the loss of property was being assessed. A fire department official on the condition of anonymity shared that some high-end cars other than BMW that were owned by the employees of the company were also damaged.

Another fire official from MIDC shared that security officials of the building spotted the fire on the first floor and immediately informed the department. “Ten fire tenders from Vashi, Koparkhairane, Turbhe and MIDC were sent to douse the fire. Around 32 cars were totally damaged. A majority of them were BMWs. Other high-end cars numbering between 13 and 18 were also partially damaged," he said.

One fire official conveyed that the internal firefighting system of the service building was not on auto mode and its battery was also at low. He added that had the system been on auto mode with running battery the fire would not have turned so destructive. Though the reason behind the fire is yet to be ascertained, BMW officials will conduct an audit to comprehend the extent of damage.