Thar can only be stopped by a curious Lamborghini, exclaimed Anand Mahindra.The new generation Thar SUV will be officially launched on October 2.
By : HT Auto Desk
| Updated on: 15 Sep 2020, 12:24 PM 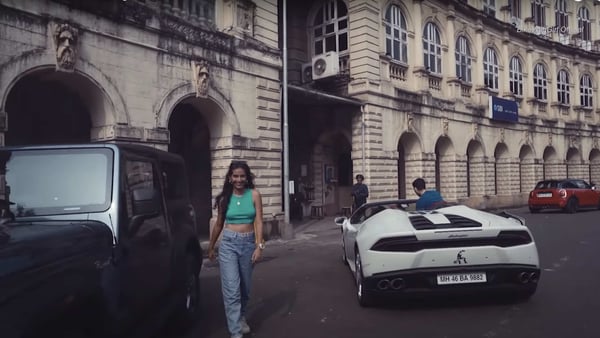 A screenshot from the video shared by Anand Mahindra showing a Lamborghini-owner checking out the new Mahindra Thar. (Photo courtesy: YouTube/BikeWithGirl Official)

With its new design that appears a lot modern than its preceding models, the new generation Mahindra Thar has captured a lot of attention since its unveiling on August 15. Mahindra aims to pitch the new-look SUV among urban enthusiasts too, besides hardcore adventurists.

The verdict is still out if the new Thar is a head-turner enough, till it is officially launched on October 2. However, it has given a taste of it already.

Mahindra Group chairman Anand Mahindra has shared a video of a Lamborghini-owner stopping his sports car on the roads of Mumbai to check out the new generation Mahindra Thar SUV.

Anand Mahindra wrote, "The Thar can only be stopped by a curious Lambo..."

The Thar can only be stopped by a curious Lambo...
Thanks for making my day @bikewithgirl Keep cruisin’... https://t.co/cUpWxT0VNb

Anand Mahindra had earlier said he too wants Mahindra Thar 2020 in his garage. Soon after its unveiling, he tweeted, "Come inside my garage, please..." Even after a week since the debut, Mahindra Thar fans have been going gaga over India’s iconic four-wheel SUV, eager to get hold of one for themselves. They even shared memes evoking Sholay, leaving Anand Mahindra impressed.

Earlier on Independence Day, Mahindra took the covers off the new generation Thar SUV. Expected to start at approximately ₹10 lakh, the versatile 4x4 vehicle now gets a mile-long list of features that has managed to generate quite a buzz - both among enthusiasts and the casual driver.

Thar 2020 brags of several highlights that seem to justify the hype it has managed to bask in. It will come in two engine options - 2.0-litre mStallion TGDi petrol engine and a 2.2-litre mHawk diesel engine, with option of six-speed torque converter automatic transmission and a six-speed manual transmission. There are also two variants - AX and LX, with the former oriented more towards adventure enthusiasts.

First launched here in 2010, the SUV has now been updated to offer much in the cabin too. A a seven-inch 'drizzle-resistant' infotainment screen offers phone connectivity options and puts out 'adventure statistics.' The speakers are mounted on the roof - unless one opts for the soft top or convertible top versions. The upholstery is completely washable while the rear seats are now forward facing. Even the switches on the dash can handle wet conditions while the vehicle itself boasts of 226 mm unladen ground clearance to help it negotiate water obstacles.