Laungi Bhuiyan made news for digging a canal to bring rainwater from a hill to his farmland.Anand Mahindra had previously promised a tractor to Bhuiyan for his herculean effort which took him 30 years.
By : HT Auto Desk
| Updated on: 22 Sep 2020, 08:56 AM 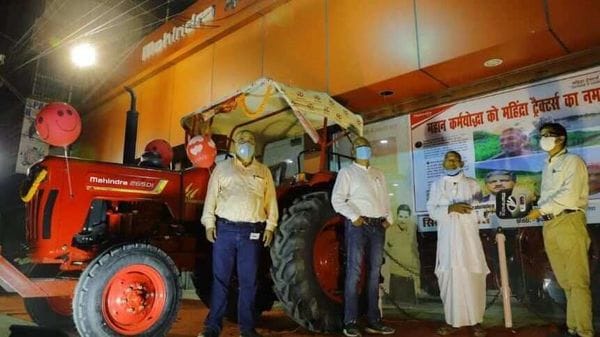 This photo was tweeted by @anandmahindra

Anand Mahindra recently gifted a tractor to a farmer in Bihar who had previously made news for digging a three-kilometre long canal over 30 years in order to irrigate his parched farmland. While Laungi Bhuiyan's achievement has been widely lauded and has earned him the nickname 'Canal Man', Anand Mahindra proposed to honour him with a tractor and a Mahindra dealership came through on it.

Sharing a photo of Bhuiyan standing next to a brand new tractor, Anand Mahindra appreciated the swift work done by his team at Mahindra Rise and a dealership in Bihar in providing Bhuiyan with what is a token of appreciation for his herculean effort. Mahindra had previously heaped praise on the farmer and had compared his feat to constructing the Taj Mahal. "As you know, I had tweeted that I think his canal is as impressive a monument as the Taj or the Pyramids. We at @MahindraRise would consider it an honour to have him use our tractor."

Anand Mahindra is quite active on Twitter and often uses his profile here to highlight noble causes. And there is little denying the appreciation that Bhuiyan rightly deserved. His mammoth - and time consuming - effort to dig the long canal was to bring rainwater from a nearby hill to his fields near Kothilawa in Lahthua area of Gaya. Speaking to news agency ANI, he said, "It took me 30 years to dig this canal which takes the water to a pond in the village."

Bhuiyan also reportedly said that he would like nothing more than a tractor to help him with his work. It is a message that reached the right ears and Anand Mahindra got his team to honour the hard-working farmer.