Amphibious combat vehicle for US troops gasps for life against waves

Up against waves measuring eight feet, the seafaring tanks of the US Marine Corps have found going tougher than previously expected.
By : HT Auto Desk
| Updated on: 22 Jul 2022, 09:24 AM 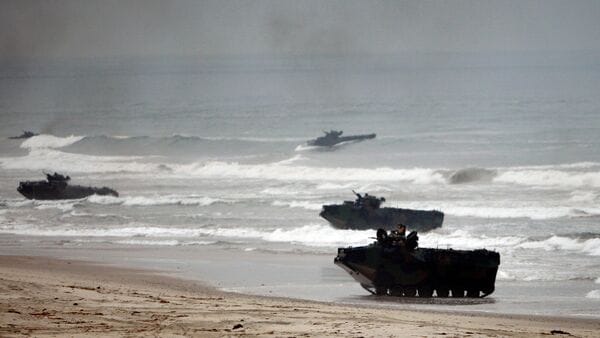 US troops have been using amphibious combat vehicles for decades and these have proved to be extremely worthy in carrying out a wide variety of operations in sensitive zones. But the latest generation of these vehicles have crashed against waves - literally at that, forcing officials to launch an investigation to find out just why high surf is proving to be an even bigger challenge.

It is reported that two of these seafaring tanks had trouble negotiating high surf caused by a storm off the southern Californian coast. Waves measuring eight feet proved to be too big a challenge for some of these amphibious combat vehicles with one even rolling onto its side. The San Diego Union-Tribune reported about the incident and highlighted that while no person was injured in the incidents, troops had to come out of the vehicles and wade or swim their way to shore.

In order to prevent a repeat of similar incidents, it has now been decided to not deploy the vehicles on water till the time a probe concludes its findings and the problem is fixed. Marine Corps will, however, continue to use these units for land-based operations.

In the past, amphibious combat vehicles have suffered from issues which have emanated from poor personnel training, lack of maintenance as well as ineffective preventive steps taken in the face of challenging natural conditions.

Amphibious combat vehicles are a crucial part of military operations for forces of many countries across the world. Tasked with the responsibility of ferrying troops and equipment from battleships to land, most of these are also equipped with assault weapons like grenade launchers and assault guns for cover fire against enemy forces stationed on beaches. The US military, in particular, made extensive use of such vehicles during the Vietnam war and has been looking to update its fleet with new-age combat vehicles which are more efficient, more silent and yet deadlier against enemy fire.