Amid raging storm, 15-vehicle crash leaves 10 dead in US

Law enforcement agencies are asking people at large to share photos and videos, if any, that could reveal what exactly caused the tragic accident.
By : ANI
| Updated on: 21 Jun 2021, 08:39 AM 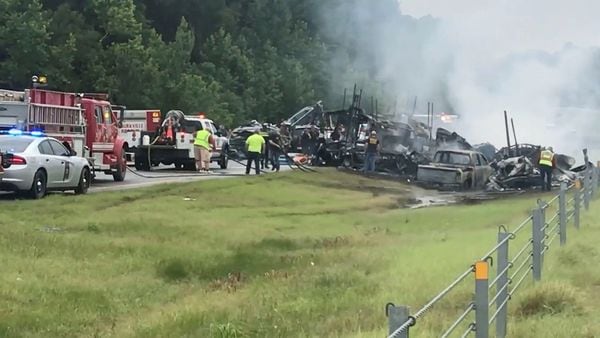 Emergency personnel work at the accident site as smoke rises from the wreckage after several vehicles slammed together on a rain-drenched Alabama highway.

Nine children and one adult were killed in a 15-vehicle crash in US' Alabama interstate highway, according to Butler County Coroner Wayne Garlock.

The accident happened on I-65 northbound at mile marker 138 on Saturday afternoon during storms that swept through the state, CNN reported citing Garlock. A tropical depression that had been known as Tropical Storm Claudette dumped heavy rain across the Southeast on Saturday after it came ashore in southeastern Louisiana early that morning.

Eight of the children killed, ranging in age from 4 to 17, were in a vehicle from the Tallapoosa County Girls Ranch, Garlock said. The youth ranch provides a home for neglected or abused school-age children, according to the Alabama Sheriffs Youth Ranches, the nonprofit that manages it.

A 29-year-old father and his 9-month-old daughter who were in another vehicle were also killed, further informed Garlock. The driver of the small Girls Ranch bus was pulled from the burning vehicle, he said, but rescue personnel were unable to reach the girls in time.

In a statement, Michael Smith, the CEO of the Alabama Sheriffs Youth Ranches, called the accident "a horrible tragedy and loss". "This morning, I have been thinking about how we do not always understand the reason things happen," Smith said.

CNN reported that People gathered at Reeltown High School in the east central Alabama town of Notasulga on Sunday afternoon to offer support and counseling to the families of some of those killed in the accident.

Principal Clifton Maddox told CNN people had gathered to "show families and students that they are not hurting alone." Four students from his high school were killed in the accident.

The Alabama Law Enforcement Agency has asked members of the public who may have photos or videos of the accident to submit them to law enforcement.