All that glitters is not gold? Anand Mahindra’s Ferrari video sparks debate

Anand Mahindra shared a video on social media of an Indian American driving a Ferrari, reportedly coated with gold, which has now gone viral.
By : HT Auto Desk
| Updated on: 21 Jul 2021, 11:55 AM 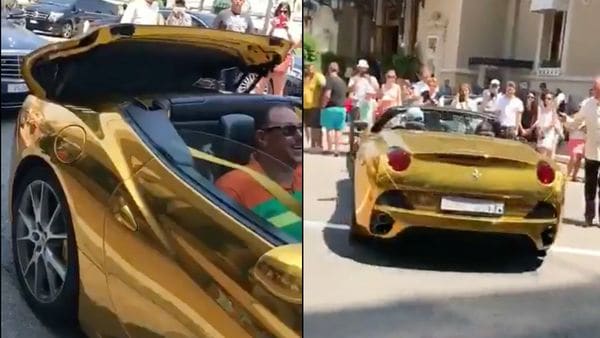 Mahindra Group Chairman Anand Mahindra stirred a bit of a debate when he shared an old video of a Ferrari supercar wrapped in shiny gold colour. The same video, running with a caption saying 'Indian American with pure gold Ferrari car', had appeared on social media platforms earlier too (as early as 2018).

Anand Mahindra shared the video on Twitter with his remarks, "I don’t know why this is going around on social media unless it is a lesson on how NOT to spend your money when you are wealthy."

The video shows a man flaunting Italian luxury sports car in public as others gather around it, often exclaiming at its super expensive appearance, to click pictures and shoot videos.

All that glitters is not gold!! Many do car wraps in gold and other fancy colours. https://t.co/NsbhULC2Zk

In a little more than 24 hours, Anand Mahindra's post has garnered over 2 lakh views and over 7 thousand likes. While Mahindra's post drew a lot of support for his concerns that it is a waste to deck up a car with the expensive metal coating, many other appeared to disagree.

It is not uncommon among the riches to use the shiny metal as the body colour of their vehicles. There are several examples around the world, including places like Dubai, where it is seen as a fashion statement too. However, in most cases, it is not pure gold, but gold vinyl coating that makes the vehicles appear as if made of gold.

One of the examples is a Ferrari 458 Spider luxury sports car owned by Riyadh Al Azzawi, former world kickboxing champion from Iraq. Seven years ago, photos appeared on social media of Al Azzawi's Ferrari wrapped in gold. However, the kickboxer later clarified that it wasn't pure gold, but simply a coating that made his car appear made of gold.