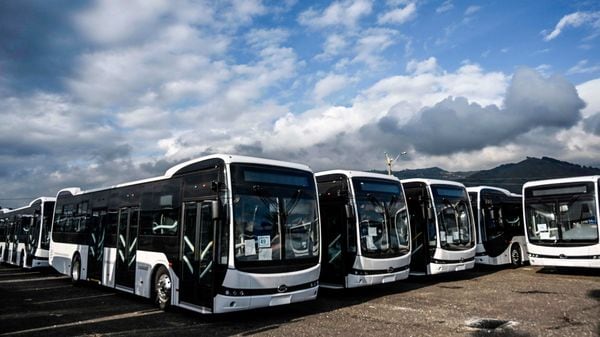 Spectators of the recent equity moonshots among electric vehicle makers can be excused for not noticing GreenPower Motor Co.

Lacking a flashy product and a showman CEO, it doesn’t burn quite as brightly as the other stock rockets. You’ll find the small Canadian startup at the retirement home, in an airport parking lot, and on the school carpool line — that’s where it’s burgeoning line of electric buses and shuttles have been slowly transforming transportation.

Green Power shares have tripled since the U.S. election. In recent weeks, the company rewarded investors with vehicle deliveries to the city of Vancouver and its first autonomous bus shipment to Jacksonville, Fla., (the city plans to use it to replace a fixed rail train).

We recently spoke to CEO Fraser Atkinson about what the Biden administration means for his business, autonomous delivery, and why EV economics arguably make more sense in buses than cars.

Why do electric vehicles make sense in a commercial business model — walk me through the economics?

In the automotive space, you’re building these vehicles that are only being used 1 or 2 hours a day and they’re on a level 2 charging station, so you’ve got a very inefficient charging system. In the space we’re operating — whether it’s shuttle, transit, and everything other than schools — we’re dealing with duty cycles that are 12, 14, 16 hours a day. It’s used all day long.

Can you give us an example?

In the case of San Diego Airport Parking, during the pandemic, they parked all of their non-electric vehicles. They are only operating our EV Star and they’re operating it 24 hours a day. That vehicle can do that because our traction motor is rated maintenance free for 600,000 miles. It can run for weeks at a time with no maintenance at all. That really highlights the effectiveness of a well-crafted electric vehicle.

How about bigger vehicles?

At the other end of the spectrum, our 40-foot, low-floor transit, we have one deployment of 10 vehicles. They have two routes of 225 and 230 miles a day and when it gets back to the depot, the state of charge is sitting at 30%. They plug into a level 3, DC fast charge, and five hours later, it’s ready to go again.

What’s the biggest hurdle to adoption? There still is a bit of a legacy range anxiety. Anyone who has ever operated an EV, in the early days, they are always worried when it gets below 50% state of charge. There’s still a little bit of that, but it’s going away quickly.

There is premium pricing. The closest any of our products are to the equivalent gas or diesel is on the transit side and that’s a premium of 30%, so we still have that hurdle.

And when you get upstream into the bigger products, the infrastructure issues become a real hurdle. The utility may need to bring in additional power, which gets extremely expensive, but more importantly, it’s very time-consuming. I’ve heard horror stories of infrastructure taking up to two years to fully deploy.

Do you do the math for potential customers on when it pays off when they recoup the investment? There are a substantial number of (subsidy) programs at local, state, and federal levels. Excluding any of those, our vehicles pencil out with a total cost of ownership anywhere between two to four years. And our build is very robust that gives it a longer life cycle than many of the vehicles we sell against. Diesel or gas models are typically sold on the basis of a five-year life cycle. We’re selling on the basis that’s it’s a good 10 years.

So the math is really pretty straightforward for an airport shuttle or a retirement home shuttle or even a school bus?

Yeah, or transit property. The logistics companies know what the diesel cost is per gallon; they equate all the numbers on a per-mile basis. The typical vehicle we might compete with that can accommodate up to 24 passengers, the diesel equivalent might have a 50-60 cent per mile cost. That’s just the fuel before you get into the additional cycle cost of having to do maintenance on your transmission and on your engine, oil changes, and other aspects that don’t exist on an EV. That works out to be between 90 cents and $1.10 on average; that’s in addition to the fuel.

Any sense of what the market will be 5 years from now? What share of these use-cases will have EV vehicles running? In the medium and heavy-duty space — trucks, vans, buses — in 5 years we’ll see somewhere around a 20% to 30% adoption level — in terms of new vehicle purchases. That’s a big, big number.

And a lot of the other technologies out there, such as autonomous driving, will drive additional changes. There are already warehouses that are pretty close to a fully robotic pick that can deliver onboard to a vehicle. So imagine our EV Star with level 5 autonomy — no driver — drives up on top of a wireless charging system. And then the vehicle gets loaded up for its next route and it heads out. You can run that vehicle 24 hours a day, seven days a week with no driver, no people. It sounds like science fiction, but we can see the steps that can take us to that completely new paradigm.

COVID has hit public transit hard, but given a boost to delivery — where does the pandemic net out for you? In the transit space, on average our ridership is down at least 40%. In many cases, transit properties are trying to figure out just how to survive. The bright spot that we see is micro-transit services — the transit property equivalent of Uber Pool. So it deals with first-mile, last-mile issues, community delivery, and so on. and our EV Star plays really well there.

And the logistics side is incredibly robust right now, so we’re working on a lot of potential deals on that side. The other area where we see an awful lot of growing demand is within the school bus space.

Typically, a school bus is used for the morning run, the afternoon run, and maybe for sporting events or weekend outings. It’s not as predictable a duty cycle as most of the other vehicles we sell and by extension isn’t necessarily used as much, that’s one of the knocks on this particular sector. However, this is the one sector where part of the reason we see demand growing is what’s happened during the pandemic. There’s research that shows that NOX emissions are incredibly harmful to the development of lungs in children. The parents have become aware of this and they’re going back to their school districts and saying: ‘We don’t care if it costs twice as much, you have to figure out a way to make this happen.’

Is the Biden presidency a source of opportunity for you? One of his stated goals is to convert all 500,000 school buses operating in the U.S. to zero emissions by 2030. That would be $120 to $140 billion. There are five, maybe six players that have certified and compliant electric school buses in the marketplace. So collectively as an industry, there isn’t a feasible path for us to build up our production capabilities to even come close to delivering on that kind of goal. On one hand, it sounds very exciting. On the other hand, it’s like ‘Wow, how are we supposed to accomplish that given where everyone’s the starting point is?’ Obviously, though, we’re very excited about that kind of initiative.