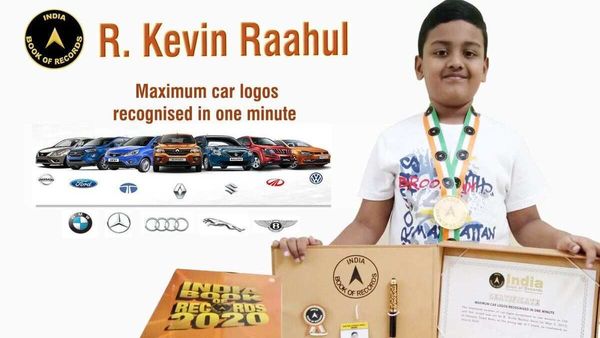 Photo of Kevin Raahul with his awards. (Photo courtesy: Twitter/@indiabookrecord)

A seven-year-old boy, Kevin Raahul, set a record when he identified 150 car logos in one minute with the achievement later being registered in the India Book of Records 2020 and the Asia Book of Records.

"I love cars very much--I identified 150 car logos in one minute and I am proud of my achievements which are mentioned in the India Book of Records and the Asia Book of Records," Raahul, the record-holder said.

His father Raju said the child was able to break the record because of his good memory and his ability to remember "everything."

"He remembers everything. He has a good memory. He never forgets anything even though we may forget," Raju told ANI.

Kevin always had a desire to meet Prime Minister Narendra Modi and eat ice-cream with him so his father told him that he would have to do "something extra special" to meet the Prime Minister.

"We told him that you would have to achieve something big in order to meet him. Then we planned this event because he was interested in cars. We tried it as a game to identify the car logos and he identified the logos really well," the father added.

The attempt for the record was made in June and was broken most recently.