Home Auto Electric Vehicles Tesla Sells 78,000 China Made Vehicles In June, Up 142% Vs May 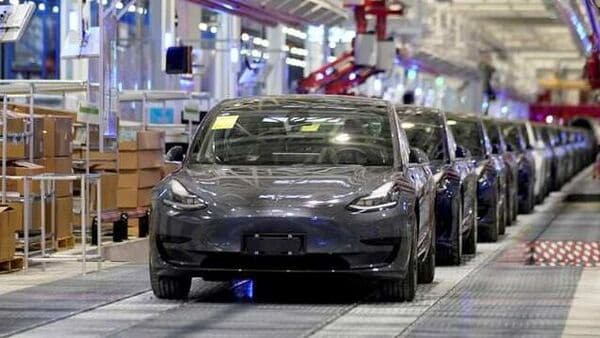 Tesla has reportedly accelerated production and sales of its China-made Model 3 and Model Y electric cars to a new record. The US electric vehicle brand sold 78,000 units of the Model 3 and Model Y EVs in June, marking a whopping 142 per cent growth compared to sales numbers recorded in May this year. The automaker sold 32,165 cars in May 2022 recording 135 per cent year-on-year (YoY) growth, claimed China Passenger Car Association (CPCA) on Wednesday. Reuters reports that Tesla actually aimed to make more than 71,000 vehicles in June from its Shanghai plant.

This surge in production and sales comes after Tesla's Shanghai Gigafactory operation was severely impacted by the Covid-19 lockdown in the second quarter. The restriction forced the plant to halt its production for 22 days from late March. I6t reopened on April 19 and resumed exporting vehicles on May 11. However, bringing back the production to pre-lockdown levels was a challenge.

This disruption in production and sales resulted in the automaker's second-quarter deliveries slumping 18 per cent from the previous quarter. This literally ended Tesla's nearly two-year run of record quarterly deliveries.

Tesla is currently upgrading its Shanghai facility to significantly boost its production capacity. This requires the company to suspend most of the production at the plant in the first two weeks of July, claims the Reuters report. Post the upgrade, the company aims to roll out 22,000 vehicles from the facility every week.

Tesla has been facing several headwinds lately. While the automaker is facing a probe from NHTSA over the faulty Autopilot issue, it is also facing a wide range of lawsuits from former employees and shareholders over racial discrimination and sexual harassment charges.