Tesla CEO Elon Musk has accused the US government of improperly targeting the company with an endless and unrelenting investigation.
By : HT Auto Desk
| Updated on: 17 Feb 2022, 07:25 PM 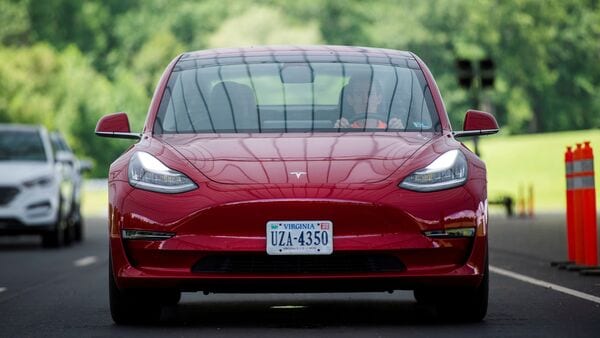 Tesla has been facing increasing pressure from NHTSA lately.

Problems seem to be increasing for Tesla, as the electric car major is facing probes one after another. The latest in the list is that over 416,000 Tesla cars are facing a probe by National Highway Traffic Safety Administration (NHTSA) over reports of unexpected braking linked to the company's driver assistance system called Autopilot.

NHTSA on Thursday has announced that it is opening a formal investigation into the matter. Reuters reports that the preliminary evaluation covers 2021-2022 Tesla Model 3 and Model Y vehicles in the US after the agency received 354 complaints about the issue over the past nine months. NHTSA said that the EVs under the scanner are claimed to have Autopilot and it allows them to brake and steer automatically within its lanes.

NHTSA said in its statement that it has received complaints reporting rapid deceleration occur without warning, at random, and often repeated in a single drive cycle, which is not normal. This comes after NHTSA in August last year opened a formal safety probe into Tesla's Autopilot system in 765,000 vehicles in the US, after a series of crashes were reported involving Tesla models and emergency vehicles.

Earlier this month, NHTSA confirmed it was reviewing consumer complaints that Tesla vehicles were activating the brakes unnecessarily. A preliminary evaluation is the first phase before NHTSA could issue a formal recall demand.

Tesla in the last few months has come under increasing scrutiny from NHTSA, which is investigating several issues and the EV maker has issued 10 recalls since October, including many for software issues and some under pressure from the road safety agency.

Last week, Tesla recalled 578,607 cars in the US under pressure from NHTSA owing to an issue with the Boombox feature, which prompted Tesla CEO Elon Musk to tweet that referred to the federal agency as fun police. Musk on Thursday accused the US Securities and Exchange Commission of improperly targeting them with an endless and unrelenting investigation.