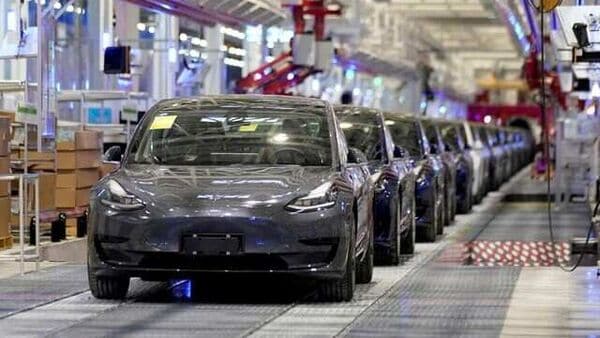 Tesla Model 3 and Model Y vehicles have been impacted due to the recall.

Electric car major Tesla hits another road bump as the auto company has recalled 59,129 electric cars around the world over a software glitch. Germany's road traffic agency KBA has said that both the Tesla Model 3 and Model Y electric cars have been impacted due to the recall program. The agency said that the software glitch causes a breakdown of the eCall, which is designed to automatically contact emergency responders in the event of a serious accident.

KBA said 59,129 vehicles were affected globally but did not specify how many of those were registered in Germany. The software glitch and the recall program come as the latest headaches for Tesla and its CEO Elon Musk. Musk last Saturday said that it delivered 17.9 per cent fewer electric vehicles in the second quarter as compared to the previous quarter. Musk also said that the Covid-19-related shutdown and restrictions in China impacted the automaker's production and supply chain.

He also said that Tesla's new manufacturing plants in Texas and Berlin are losing a huge sum of money, as both these Gigafactories have been struggling to increase production volume as the shortage of critical components like batteries and microchips has been disrupted. The logistics problem at Chinese ports too impacted the company.

In the last few months, Tesla has faced several headwinds. Over 830,000 Tesla vehicles have faced an investigation by NHTSA over the faulty Autopilot system. On the other hand, Tesla has been accused of racial discrimination and sexual harassment. Several lawsuits were filed against the company over the last few months. Even a shareholder of the company slapped a lawsuit against Tesla CEO Elon Musk and other board members of the automaker.