Home Auto Electric Vehicles New Mg Zs Ev To Get I Smart Technology, Will Come With Over 75 Connected Feature

New MG ZS EV to get i-Smart technology, will come with over 75 connected feature 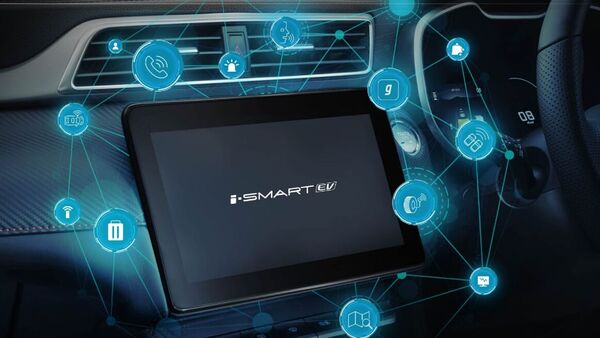 The 2022 MG ZS EV will come with a tab-like touchscreen infotainment screen.

MG Motor India on Friday has announced that its upcoming updated ZS EV pure electric SUV will come with i-Smart technology that will offer over 75 connected features. The new Mg ZS EV is also claimed to be coming with Car-as-a-Platform (CaaP) subscription model. MG Motor India is slated to launch the new ZS EV in India on 7th March. The carmaker has teased the infotainment system of the electric SUV ahead of its launch.

(Also Read: 2022 MG ZS EV, with significant updates, to launch on this date)

The MG ZS EV is one of the few electric cars available in the Indian market and it competes with rivals such as Tata Nexon EV, Hyundai Kona EV. The British carmaker has updated the ZS EV and it has been already launched in the UK. The updated ZS EV is expected to hit Indian showrooms soon.

The new MG ZS EV comes with a restyled appearance that makes it visually more appealing compared to the outgoing model. Also, it has received a host of changes inside the cabin. One of them is an updated touchscreen infotainment system at the centre console with a tab-like display. It gets a host of connected features, claims MG. For these connected services, the automaker has joined hands with Jio, Park+, MapMyIndia and Shortpedia. As MG claims, through these partnerships and the CaaP model, the new ZS EV will offer on-demand in-car services and subscriptions in utility and entertainment segments.

MG first launched the ZS EV in India in 2020. Considering the limited number of electric cars available in India, the ZS EV fared pretty well. However, with the increasing competition, MG aims to take the game up one notch with the upcoming updated ZS EV.

The new MG ZS EV is capable of running a 622 km range on a single charge and it is available in two different battery variants - 51 kWh and 73 kWh. The electric SUV churns out 156 PS of power and 280 Nm of torque. Also, it is capable of accelerating 0-100 kmph in 8.2 seconds. The SUV gets fast charging technology allowing 80 per cent charge in one hour.