Mahindra and Mahindra will officially unveil five electric SUVs on August 15. The carmaker has shared a second teaser to showcase some of the features.
By : HT Auto Desk
| Updated on: 03 Aug 2022, 19:42 PM 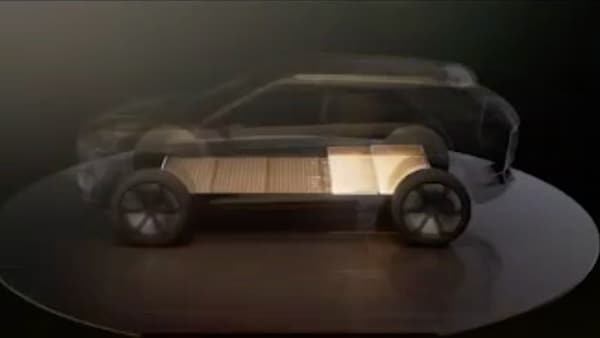 Mahindra and Mahindra has shared a new teaser video of its upcoming electric SUVs.

Mahindra and Mahindra is gearing up to officially take the covers off its five electric SUVs on India's 75th Independence Day on August 15. Ahead of the global unveil, which will take place at Mahindra's new EV facility in Oxfordshire in United Kingdom, the carmaker has shared a new teaser video to give a sneak peek into what to expect from these EVs. Earlier, under the Born Electric branding, Mahindra had teased the five upcoming electric SUVs, which include coupe, crossovers and large SUVs.

The new teaser video shows that the electric vehicles under Mahindra Born Electric Vision will come with Sport mode besides regular drive modes. It also hints at offering fast charging compatibility. On the inside, Mahindra's new electric SUVs will offer ample scope for personalisation. The teaser video shows that the front row seats are electrically adjustable and are likely to get memory functions. The cabin will also get automatic climate control, ambient colours and personalised music playlist among other features.

Last month, Mahindra had teased its new upcoming electric SUVs. One of the electric SUVs, which appears in silhouette, has a coupe-ish profile with a crossover-like body shape. There is one more with a body shape that resembles the XUV700. Among the five new electric SUVs to be introduced by Mahindra on August 15 is the XUV400. It will be the first electric vehicle from Mahindra. The driving range of the regular version could be around 200 km whereas the long-range version could have a driving range of 375 km.

The Indian carmaker recently signed an agreement with British International Investment to increase investment to manufacture its upcoming electric cars for India. Mahindra will set up a new company dedicated to electric vehicles, where the British firm will have a stake of no more than five percent. Mahindra's new EV company will get a total investment of around ₹8,000 crore between 2024 and 2027.

Mahindra's new electric vehicles are being developed and designed by the Mahindra Advanced Design Europe (MADE) located in the UK, under the leadership of the automaker's chief designer Pratap Bose.