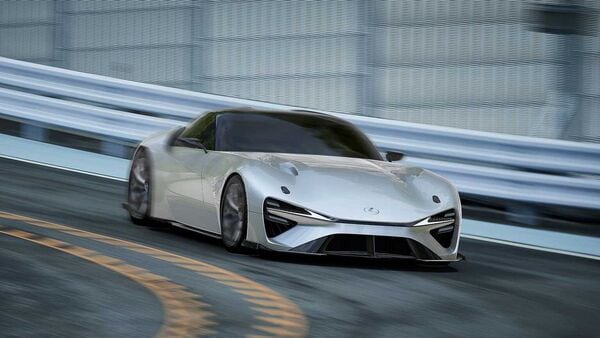 Toyota owned Japanese luxury carmaker Lexus has been teasing its upcoming pure electric supercar that comes bearing the legacy of LFA. The automaker has released a fresh set of images of the car revealing more about its overall design.

The Lexus electric supercar is one of the 15 Toyota and Lexus electric vehicles that were previewed by the automobile group on 14th December. The carmaker describes this all-electric supercar as an EV with bold proportions and the low ride height required for a high-performance sports car. It also claimed to come symbolising the future of the Lexus brand while also reviving the spirit of iconic Lexus LFA.

Lexus claims the LFA will be capable of sprinting 0-100 kmph in less than two seconds. The supercar is claimed to be offering a driving range of more than 700 km on a single charge. It will draw energy from a solid-state battery, revealed the automaker in a recent statement.

Lexus also said that electric supercar would be playing a key role in the automobile group's overall EV strategy, as it aims to launch a major product offensive by the end of this decade.

The car comes with a design that grabs attention easily. Also, it is clear from the overall design that Lexus has taken inspiration from the original LFA. The car gets sleek LED headlamps and integrated LED daytime running lights, large air dams at the front. The large wheels, nicely curved sloping coupe roofline add more style to it. The rear gets LED taillights and a sloping panel that is claimed to have been inspired by bugs.

This car will be sold under the Lexus Electrified wing and it will be initially launched in China along with Europe and North America. Speaking about the car, Lexus International president Koji Sato said that it will take the pursuit of the Lexus driving signature to the next stage. "It will be a model that symbolizes the future of the brand," Sato further added.