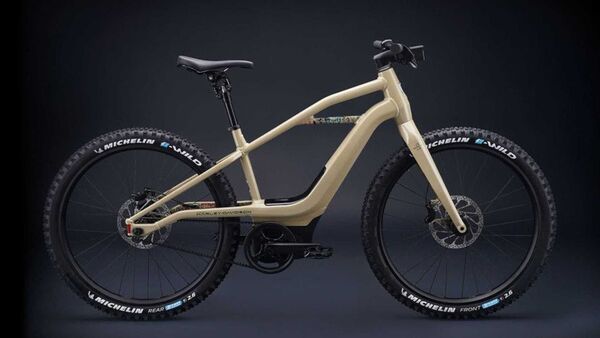 Harley-Davidson Serial1 mountain bike is capable of running at a 32 kmph speed in full electric mode.

Harley-Davidson spun off its electric bicycle wing Serial1 with a lot of promise and the e-cycle division has now launched its latest product, an electric mountain bicycle named BASH/MTN. This comes following the previous electric bicycles from the brand that includes MOSH/CTY and RUSH/CTY models. The previous models were meant for urban commuting, while the new one is more focused on adventure riding, claims Serial1.

However, Serial1 claims that this mountain bike is not exactly built for hard-core trail riders, which means it can be used for soft offroading. The Serial1 BASH/MTN is claimed to have a 529 Wh battery pack that allows it to run a range between 30 and 95 km on a single charge, depending on the terrain and driving mode. The manufacturer claims it takes around five hours to get fully charged and 75 per cent of that can be recharged in just 2.5 hours after being completely drained.

The electric bicycle is built on the same sturdy frame as the Serial1's MOSH/CTY. It gets Michelin E-Wild knobby tyres and an SR Suntour NCX seat post that comes with a travel of 50 mm. However, it doesn't get any suspension setup at the front and rear. Considering the fact that this electric bicycle lacks any suspension on both ends, it is more akin to a gravel or cyclocross bike. While moderate offroading on this bicycle is possible, hardcore mountain riders will find it very difficult.

The electric cycle's motor is claimed to allow it to run at a speed of 32 kmph as a Class 1 e-bike before restricting power output. For braking duty, it gets four-piston 203 mm hydraulic disc brakes.

Serial1 claims the electric mountain bike will be built in a limited number of 1,050 units only and it will be priced at $3,999.