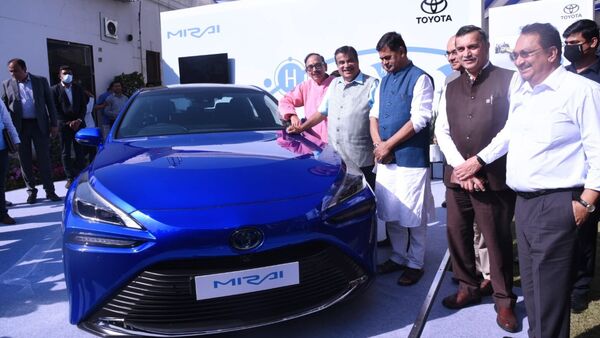 Electric vehicles and car running on alternative fuel like hydrogen will change the auto industry in India in the next five years. Expressing his optimism about a shift in attitude, Nitin Gadkari, Union Minister for Road Transport and Highways said that adoption of electric and alternative fuel-powered vehicles will rise exponentially in the next five years. Union Minister Nitin Gadkari was present during an event today where Japanese carmaker Toyota Motor launched India's first hydrogen powered fuel cell electric vehicle Mirai.

Nitin Gadkari made his remarks while replying to a question in the Rajya Sabha. He said that sales of petrol and diesel vehicles will eventually fall in coming days, giving away its space to electric and alternate fuel-powered vehicles. However, he did not give a clear timeline by when EVs and alternative fuel vehicles will overtake sale of ICE vehicles.

Gadkari said, "It (alternate fuels and electric vehicle) should be natural choice of the consumers...we don't want to commit (or fix any target for EV). Total game will be changed in next three years. Sales of petrol and diesel vehicles will reduce day by day. Alternate fuel and electric vehicle sales will increase. After five years total scenario will change."

"This is time for us to shift to alternate fuel, electricity, ethanol, methanol, Bio CNG, green hydrogen in the interest of nation, economy, ecology and environment. We are on the path," he said.

Gadkari also reminded the cost efficiency of an EV compared to an ICE vehicle. He said that a customer will choose an EV if the car and a petrol car with similar cost will see massive difference in ownership cost due to fuel used.

Gadkari also dismissed concerns over lack of EV charging infrastructure in India. "I never understand this (issue of shortage of EV charging infra). There is lot of discussion...NHAI is making 650 charging stations. Every 40 km (on highway) with roadside amenities."

Gadkari also said that rising cost of EV batteries is a concern. "Presently lithium ion is a big challenge. We don't have lithium ion. About 81 per cent batteries we manufacture here in India. Now lithium ion is available in the world. Government is in the process to acquire some mines," he said.