Ola Electric's CEO took to Twitter to explain that he never thought of this use case while designing the S1 electric scooter.
By : HT Auto Desk
| Written By : Prashant Singh
| Updated on: 25 Jun 2022, 17:54 PM 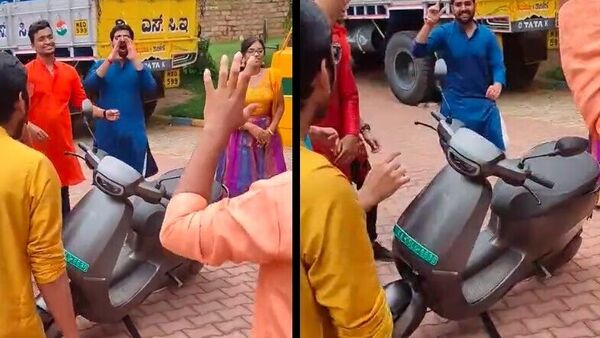 A college group can be seen dancing on the tunes played on Ola electric scooter.

Ola Electric launched the S1 electric scooter in the Indian market last year starting at ₹1,29,999 (ex-showroom). The Ola S1 quickly gained popularity for offering a host of features, multiple range options and several bits that brought it to the centre stage of the two-wheeler EV ecosystem in the country.

Offered with a host of segment-leading equipment and features, one of the most notable bits of the Ola S1 includes its wireless Bluetooth speakers. Ola’s S1 Pro gets twin physical speakers, and thanks to the Bluetooth connectivity, the riders can even listen to music even on the go.

A recent video surfaced on the internet in which a college group was seen dancing to the tunes played on the Ola S1's speakers. The video gathered views in several thousand and also caught the attention of the company CEO, Bhavish Aggarwal. He tweeted the video writing “Never thought of this use case while designing it".

Never thought of this use case while designing it😄❤️ https://t.co/y5JQWveH0r

Ola had also recently rolled out the MoveOS 2 over-the-air (OTA) update for its more than 50,000 S1 Pro customers across the country. Soon after this update, the company is also planning to work on the next generation MoveOS 3 OTA update in a bid to improve the performance of its electric scooter.

(Also read: Ola Electric CEO reveals why he is against hydrogen cars)

Aggarwal has previously also tweeted that Ola is also ramping up the MoveOS 2 rollout. He added, “Starting to work on MoveOS 3. Will share more on 15th Aug. In addition to features, we will focus on regen and make it significantly better in MoveOS 3."