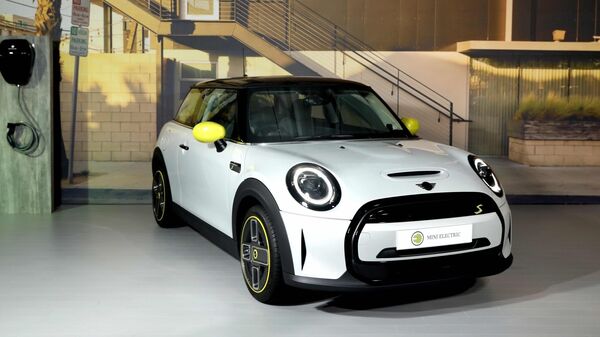 The Cooper SE is MINI’s first electric car in India.

BMW Group on Thursday has launched the all-electric Mini Cooper SE in India, priced from ₹47.20 lakh (ex-showroom). The three-door pure electric hatchback comes as the first EV of the British car marquee. Also, it is the second all-electric offering from BMW Group in India after the BMW iX that was launched in the recent past.

The Mini Cooper SE promises a 270 km range on a single charge. Mini claimed that the first batch of this all-electric luxury hatchback was sold in just two hours in November 2021, after opening booking for the model and the carmaker will start deliveries in March 2022. Also, the bookings for the second batch will commence next month, informed the automaker.

Mini unveiled the new Mini Cooper SE in 2019 and it is being brought to the Indian market through the CBU (Completely Built Unit) route. The EV looks identical to the internal combustion engine-powered Mini Cooper, but owing to the heavy battery pack, it is around 145 kg heavier than the ICE counterpart.

Speaking about the design of the new Mini Cooper SE, the electric hatchback comes with a smooth body panel in place of the conventional front grille. It comes with a lot of chrome accents along with the E badge that makes it distinctive from the ICE variant. The car sports neon yellow accents, both on the exterior and inside the cabin. It runs on aero-optimised wheels.

The interior of the car is packed with features and offers a premium vibe. The typical Mini design elements are present there. For the power source, the Mini Cooper SE gets a 32.6 kWh lithium-ion battery paired with the electric motor. The electric powertrain churns out 184 hp of power and 270 Nm of torque and promises a 270 km range on a single charge.

Mini Cooper SE is capable of sprinting 0-100 kmph in 7.3 seconds and it is capable of running at a top speed of 150 kmph. The car gets fast charging technology that allows 0-80 per cent charge in 2.5 hours using an 11 kW charger, while a 50 kW DC fast charger can charge the same in 36 minutes.