Powering a scooter through battery may be simple but what about a tank weighing 60 tons? Battery tech advancements may have the answer.
By : Shubhodeep Chakravarty
| Updated on: 17 Jun 2022, 09:39 AM 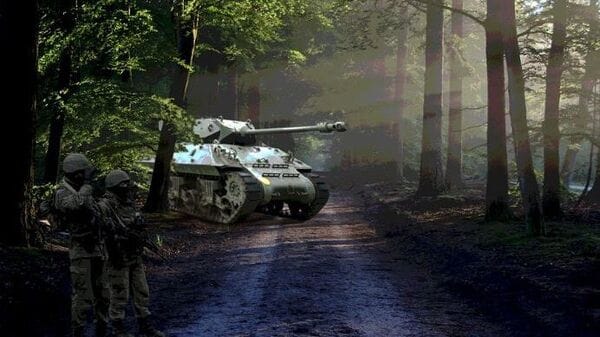 The thought of an electric motor playing a role in a military tank may have seemed entirely impossible just a few short years ago. But in today's times, electric power is at the core of modern-day cars, scooters, motorcycles, three-wheelers and is even being tested to potentially power ships and aircraft. While EVs are increasingly becoming common sight in the civilian world, the secretive world of global armed forces may also be working towards incorporating the technology. But an electric army tank? It may either seem technologically un-doable or unfeasible. Or is it?

The advantages of having a fossil-fuel-guzzling army tank take to electric power is obviously aplenty. After all, sipping a litre of fuel to go just under a kilometer may seem rather blasphemous in today's times when climate change and emissions are vital talking points. But in military circles, it is the firepower a tank boasts of and its armoured capabilities that remain top priority with mileage hardly ever talked about.

(Also read: Demand for Tactical Wheeled Vehicles on the rise world over)

But defence experts mostly agree that hybrid technology does have the potential of allowing modern tanks to remain a potent force on the battlefield with the potential to save the world while saving the world. “The benefits of electric or hybrid vehicle technologies extend well beyond fuel efficiency and offer the organisation, as an Army in Motion, real opportunities to progress objective and future force capabilities," wrote Major Matthew Wood of the Royal Australian in an article back, as per this report. “Change is not always desirable; however, forced change in times not of our choosing is not only undesirable, but potentially chaotic and expensive."

Defence departments of and private firms in various countries are already learnt to be working on a hybrid powertrain for army tanks. German firm Flensburger Fahrzeugbau Gesellschaft has been working on a tank called Genesis which has an electric output of 1,368 kilowatts, a top-speed of 40 kmph and a range of 150 kms. The British and US armies too have reportedly considered electric power for tanks with work believed to be at varying stages of development.

What is primarily changing the scope of what is possible is that electric batteries thus far were just not capable enough to power tanks which mostly weigh in excess of 60 tons. But rapid strides in battery-development technology are promising to push the boundary and expand application areas.

So while electric power in light combat vehicles, reconnaissance vehicles and even smaller armoured units is nearly upon us, the years ahead could see the big-time evolution of tanks with the same lethal capability but with a clean-energy source at the core.

(With inputs from Asia Times)