The 31-inch 8K display with OLED technology inside the BMW i7 promises next-level rear-seat entertainment. The screen comes out of the roof of the car, which means it can be retracted when not is use.
By : HT Auto Desk
| Updated on: 16 Mar 2022, 04:18 PM 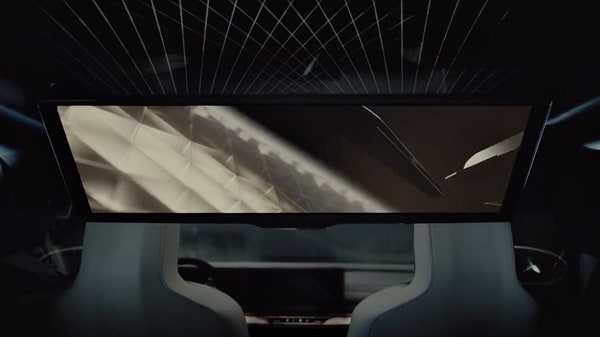 BMW has teased the interior of the upcoming i7 electric sedan which will have a 31-inch giant cinema screen with OLED technology.

BMW is all set to debut its first fully-electric luxury sedan i7 next month. The German carmaker has announced that the 2023 BMW i7 will break cover at the Beijing Auto Show in China on April 20, as well as other places around the world. BMW made the announcement today, while teasing the new i7 on its social media handles. Among key features will be crystal glass headlights and a giant cinema screen inside.

BMW Group released a statement today. It said, “All of us at BMW are looking forward to the market launch of the new BMW 7 Series this year: progressive, digital, and innovative, it is also the only luxury sedan to offer customers a choice of drivetrain variants. By the way, the most powerful variant — the BMW i7 — is fully electric. In April we will present it in New York, Munich, and Beijing, representing the major regions of the world."

BMW has also shared a teaser video of the upcoming electric sedan. It shows some of the striking features the 2023 i7 will have. The electric sedan will come with a similar-looking illuminated grille as seen on the new iX electric SUV, split headlamps which will have some of its parts made from ‘exclusive crystal glass’, a new sunroof with updated lightning function called the Sky Lounge.

The cherry on the cake could be a giant entertainment screen inside the new i7. The 31-inch 8K display with OLED technology promises next-level rear-seat entertainment. The screen comes out of the roof of the car, as is shown in the teaser video. This could mean that the cinema screen could be retractable.

2023 BMW i7 is likely to be powered by dual-motor electric system. It will also have an all wheel drive system, the latest iDrive technology and possibly Level 3 autonomous driving feature too. The two electric motors are likely to generate maximum output of 610 horsepower (in Sport mode) and a staggering 1,100 Nm of peak torque.