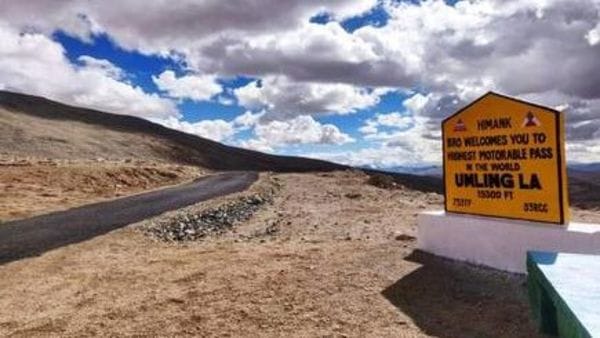 Umling La Pass, located in eastern Ladakh at an altitude of 19,300 feet above sea level, is now the world's highest motorable road.

India can now boast of the world's highest motorable road, thanks to the efforts of the Border Roads Organisation (BRO). The road construction agency, which has expertise in laying roads in one of the most inhospitable terrains along India's northern borders, has achieved this feat earlier this week.

The world's highest motorable road is now situated at the height of 19,300 feet at Umling La Pass in eastern Ladakh. The BRO constructed a 52-km long tarmac road through this high mountain pass. The road at Umlingla Pass now connects the important towns in the Chumar sector of Eastern Ladakh.

A statement issued by the Defence Ministry on Wednesday said, "It will prove to be a boon to the local population as it offers an alternate direct route connecting Chisumle and Demchok from Leh. It will enhance the socio-economic condition and promote tourism in Ladakh."

Umling La Pass will be more challenging for drivers than the famous Khardung La Pass. According to the Defence Ministry, the temperature at this pass can drop to as much as -40 degrees Celsius during peak winter season. Also, the oxygen level at this altitude is about 50 per cent less than at normal places, making it very difficult for anyone to stay here for too long.

Umling La Pass has now eclipsed the previous record of 18,953 feet, located in Bolivia. The road connects to a volcano called Uturuncu.