Audi India, which had recently launched its 8th generation A6 sedan with mild hybrid technology, is considering hybrids and plug-in hybrid vehicles to be brought to the country.
By : Press Trust of India
| Updated on: 03 Nov 2019, 11:12 AM 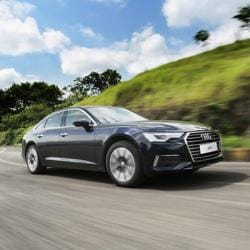 Audi had earlier too stated that it was driving away from diesel technology as the future is in electric and hybrid vehicles.

German luxury carmaker Audi will transition into the BS-VI emission norms with petrol vehicles and alternate fuel technologies, although it has ruled out exiting diesel engines totally, according to a top company official.

Audi India, which had recently launched its 8th generation A6 sedan with mild hybrid technology, is considering hybrids and plug-in hybrid vehicles to be brought to the country.

"BS-VI we will start with petrol only, across all models but diesel is not completely out of the picture," Audi India Head Balbir Singh Dhillon told PTI.

"Going forward we will launch only petrol and we will also have electric cars coming to India. Whether we will completely exit diesel is something we are still on our drawing board," he added.

Dhillon was responding to a query on whether the company will follow the footsteps of the likes of Maruti Suzuki and Renault which had announced that they will not be selling diesel vehicles once BS-VI emission norms come into effect from April 2020 due to vehicle affordability issues.

Audi had earlier too stated that it was driving away from diesel technology as the future is in electric and hybrid vehicles.

"We have to also keep in mind there are other technologies, such as mild hybrids and plug-in hybrids. As we go forward we will also experiment with multiple technologies," he added.

Moreover, he said said, "Government has allowed us to use certain cars to be imported -- 2,500 cars annually -- without homologation (conformity with Indian regulations). Those are the space around which we will be playing more and more and see what works for India." Asked if Audi could deliver if there was demand from customers for diesel option of its popular SUVs after BS-VI comes into effect, he said, "In the short term, (for) Q7 we don't have diesel. If some customers say we want only diesel, we may not have a solution for them for sometime." "If somebody asks for a Q7 in diesel on April 1, I have to say no. We are not close to the topic but as of now I will not just say no but will convince the customer to buy petrol." Dhillon said Audi's decision to drive away from diesel has also to been influenced by changing customer buying behaviour with petrol finding more acceptance.

"At one point of the time the (luxury) industry was almost 100 per cent diesel. Barring the sports cars, everything else was diesel. But in the last few years, including the current year, we are already seeing 30-35 per cent petrol.