California Governor had given a green signal for Tesla factory to reopen, but Alameda County said in a statement that its current health order takes precedence over the Governor's announcement.
By : Bloomberg
| Updated on: 09 May 2020, 09:23 AM 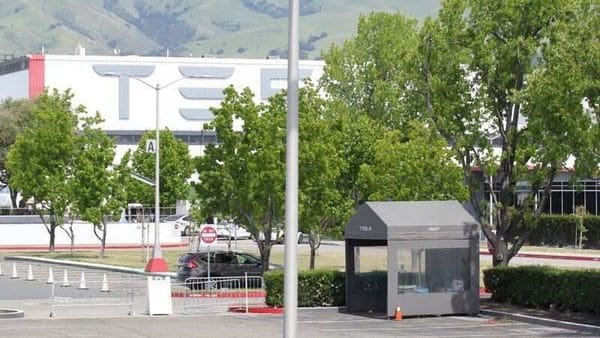 Tesla Inc. plans to reopen its sole U.S. car plant as soon as Friday, possibly setting up another battle with local health authorities in California.

What Musk didn’t mention in his memo is that Newsom also had said local authorities could remain more restrictive than the state. San Francisco Bay area counties including Alameda, where Tesla’s plant is located, said they were leaving in place health orders that extend through the end of May.

Tesla representatives didn’t respond to requests for comment. Valerie Capers Workman, the carmaker’s head of North American human resources, told employees in a separate email that Tesla’s Fremont plant will start operations with 30% of normal headcount per shift. It’s unclear whether that level of staffing will be enough to allow the company to produce cars again.

Musk, 48, has sharply criticized shutdown orders, calling them “fascist" and comparing them with forcible imprisonment. Tesla resisted pressure from Alameda and Fremont officials to idle the plant in March, claiming it was an essential business. The county’s health officer disagreed and said the factory posed a risk to public health.

Another reason it’s unclear whether Tesla will be able to produce vehicles -- even if Alameda allows the company to reopen in Fremont -- is that its suppliers in other states may not be allowed to operate yet. In Michigan, Governor Gretchen Whitmer issued a separate announcement Thursday giving manufacturers the green light to reopen beginning May 11. That clears the way for parts suppliers to support General Motors Co., Ford Motor Co. and Fiat Chrysler Automobiles NV’s plans to restart their North American plants on May 18.

“We’re not out of the woods yet, but this is an important step forward," Whitmer said in a statement. “This is good news for our state, our businesses, and our working families."Whitmer’s decision clears the way for parts suppliers to start running their assembly lines to support vehicle plants resuming production later this month.

Tesla shares rose as much as 4.6% shortly after the open of regular trading Friday.

Musk cheered Newson’s announcement in a reply to one of the governor’s Twitter posts on Thursday. But Alameda County said in a statement that its current health order takes precedence over Newsom’s guidance.

“We will continue to work with our community and business leaders to accomplish careful, measured progress that allows us to maintain our gains as we move forward to further reopening and better times ahead," Alameda said in a joint statement issued by San Francisco Bay area counties and cities.

Tesla isn’t producing any vehicles worldwide after having suspended production at its only other car factory, located on the outskirts of Shanghai, this week. Several workers who were supposed to return to work on Wednesday after China’s five-day Labor Day break were told that their holiday would be extended and they will return as soon as May 9, people familiar with the matter have said.

In a press conference Monday, Newsom said the state isn’t telling local governments that feel it’s too soon to reopen to modify their orders.

“For example, the Bay Area, Northern California, they have guidelines where they are a little more strict than these guidelines," he said. “If they choose not to come into compliance with the state guidelines, they have that right."

Michigan is providing clear guidance for auto companies, component makers and factory workers after weeks of uncertainty about the timing. Most auto output ground to a halt in mid-March to slow the spread of the coronavirus and brace for a slump in car demand from home-bound consumers.

Losing just two weeks of production cost GM $600 million in cash in the first quarter, and carmakers have been borrowing money to tide them over during a shutdown likely to hurt second-quarter earnings even more.

The United Auto Workers, whose members man the assembly lines at Ford, GM and Fiat Chrysler, has resisted earlier efforts to reopen plants. But the union’s president, Rory Gamble, signaled earlier this week the UAW would defer to the manufacturers after participating in meetings with them on safeguarding worker safety.

“We all knew this day would come at some point," Gamble said in a statement. “While the companies have the sole contractual right to determine the opening of plants, our UAW focus and role is and will continue to be, on health and safety protocols in which we have the contractual right to protect our members."

Under Whitmer’s new executive order, manufacturers must implement a series of measures designed to protect workers from Covid-19. These requirements include a daily screening protocol when workers enter plants, including a questionnaire and temperature checks “as soon as no-touch thermometers can be obtained."

They must also create dedicated entry points at every facility and suspend visits by all personnel deemed nonessential such as factory tour guests. Ford, GM and Fiat Chrysler already have those protocols in place.