Home Auto News What Speed Limit? Millionaire, 58, May Be Jailed For Racing Supercar At 417 Kmph

What speed limit? Millionaire, 58, may be jailed for racing supercar at 417 kmph

Bugatti Chiron is one of the fastest car anywhere in the world. On German autobahn, it has a free pass to sprint but question is, should it?
By : HT Auto Desk
| Updated on: 31 Jan 2022, 11:46 AM 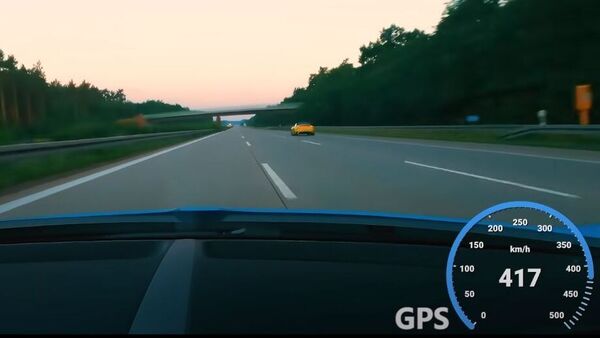 A Bugatti Chiron on a German motorway may be the ultimate dream of speed aficionados but a 58-year-old millionaire tycoon is now facing potential jail time for allegedly letting his need for speed reach outrageously risky levels. While German autobahn are known for having no speed limits and often seen ultra capable vehicles thunder at blazing fast speeds, Radim Passer has been charged for participating in an illegal race in which he is believed to have driven his Bugatti Chiron at 417 kmph.

The Chiron is one of the fastest and most capable supercars that money can buy and therefore, it is little wonder that the video of Passer charging ahead in his Bugatti attracted a whole lot of attention online. The Sun reports that the video even shows the speedometer, at one point, touching 417 kmph. The video was reportedly shot on a straight stretch of a motorway between Berlin and Hanover.

Chiron has a top speed of around 420 kmph and is powered by a 1,500 hp engine. While it is capable of touching even higher speeds, the top speed is limited as tyres could possibly burst if pushed further. At almost $3 million, the Bugatti is available for only the few who can afford to buy and maintain it and Passer clearly is one such person.

But Passer's speed stunt has led many to once again raise concerns over the safety inside such vehicles and of those around. Many in Germany, including F1 racer Sebastian Vettel, have urged authorities to impose speed restrictions on German autobahn which are famous for not having any speed-related restrictions outside of urban areas.

As per reports, Passer said that safety was crucial during the said drive and that the stretch was empty and with good visibility levels. But many who are flagging him online say that he should set better example and that no driving trait which could endanger road users should be encouraged.