Watch: This Toyota Prius gets struck by lightning 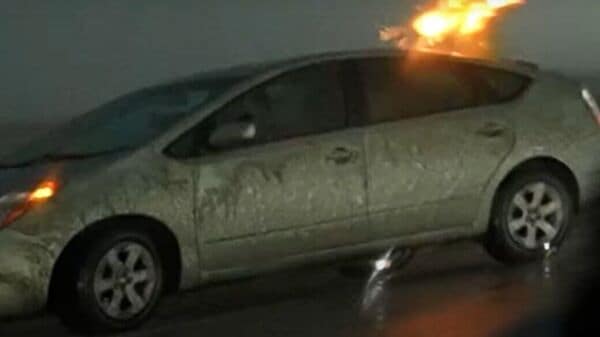 Screengrab from the video posted on YouTube by More Pi.

A video of a Toyota Prius getting struck by lightning has come up on the internet. Posted by a YouTube channel More Pi whose team chases tornadoes and extreme weather conditions, the video has garnered more than 4,70,000 views.

In the video, one can a person recording a strong windstorm and carefully manoeuvring through the storm site when there is a flash of blue light followed by a loud crack sound. The Toyota Prius immediately shuts down. Viewers can notice the lightning first strikes the antenna of the car first creating a huge flame. After the lightning strikes the car, one of the cameras on the Toyota Prius stops recording the video though one can still hear the audio. The camera at the rear of the car has some glitches for a while but keeps recording while one toward the individual continues to work without any issue.

In the video's description box, the channel members informed that the dealer had to replace the engine control module to check the issue. The dealer also found three more ECUs that need replacement. The owner of the Toyota Prius added he will try to fix these control units himself in order to save some money.

The video received huge traction as many shared their own experiences with tornadoes and lightning while driving their vehicles. One commenter said he used to chase for 20 years and had an experience of two close strikes among which one left him deaf for almost two days. Many also shared their wishes for the owner. One said he was glad that the owner was okay and how fascinated he was with the video.