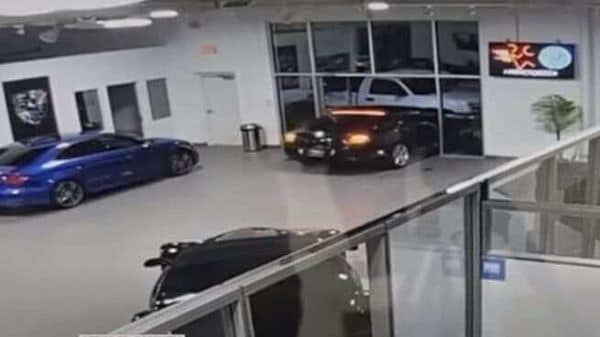 Photo courtesy: Screengrab from a video posted on YouTube by FOX 17 WXMI.

Lockdowns around the world have also been an opportunity for thieves trying to steal expensive cars as incidents of auto thefts have surged in recent times in the US. Recently, a security footage captured thieves stealing a Bentley Continental GT from a dealership, reported Fox 17. What happened next was bizarre as they drove the stolen vehicle right through the showroom's doors, breaking the glasses, in a real-life incident straight from the reel world of 'Gone in Sixty Seconds' movie.

The Bentley was worth nearly $40,000 and was stolen from a used car dealer European Autohaus in Michigan. The dealer posted the news on Facebook with a picture of the car and asked all other dealerships in the area to keep an eye out for such thieves.

The thieves broke into the showroom through a small window and searched the shelves for any working keys before they found one for the Bentley, the General Manager of the showroom, Justin Ryan was quoted as saying by Fox 17.

However, this was not the only car the thieves stole that night. Before driving out the Bentley, the group broke into Elhart Hyundai Car Dealership in Michigan and stole four different cars. These included Hyundai Palisade, Genesis G70, Chevrolet Impala and Ford Fusion.

(Also read: Top-10 most stolen cars in the US: Family sedans and SUVs are hot wheels)

Police officers had arrived to the suspects driving off these car and managed to chase the Ford Fusion for about 20 miles before the thief abandoned the car on the roadside and fled. No arrests have been made so far.

More than 36 cars have been stolen over the course of approximately two weeks from the Grand Rapids area dealerships in Michigan, MLive reported. Some stolen vehicles have also been used to commit other crimes such as break-ins. The police have already make a few arrests concerning the auto thefts.