Watch: Parked cars get swallowed by giant sinkhole in Jerusalem

The video of the sinkhole gobbling up several cars parked outside a hospital in Jerusalem went viral on social media.
By : HT Auto Desk
| Updated on: 08 Jun 2021, 03:55 PM 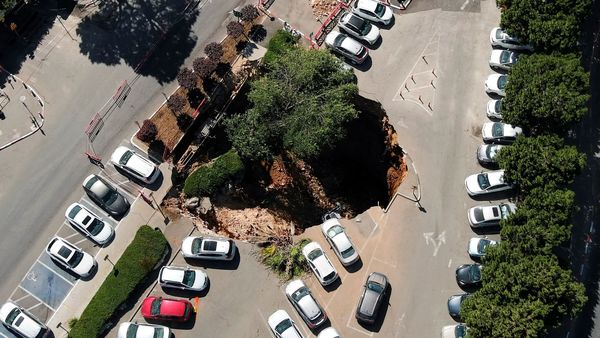 A drone photo shows a part of a parking lot that collapsed into a sinkhole outside a hospital in Jerusalem.

Parts of a parking lot outside a Jerusalem hospital collapsed into a sinkhole, taking several parked cars along with it. Videos of the incident went viral as several bystanders recorded the moment the parking lot collapsed with around 50 vehicles parked in the vicinity.

According to reports, the incident took place at Shaare Zedek Medical Center in Jerusalem on Monday afternoon. The authorities say that the sinkhole appeared near a highway, where a tunnel is being constructed. According to local reports, the tunnel also runs underneath the hospital and the parking lot, where the sinkhole developed.

The Jerusalem affairs ministry said that authorities are investigating if the digging of the tunnel has any connection with the sinkhole incident.

The videos of the incident, which were shared widely across social media platforms, show at least three cars being swallowed by the sinkhole. The hospital had recently opened a new parking lot able to accommodate several hundred vehicles.

A special rescue unit was deployed to search for any person who may have been trapped inside vehicles that went down the sinkhole. However, according to reports, the cars fortunately did not have any occupants at the time of the incident. Therefore, there were no injuries or casualties.