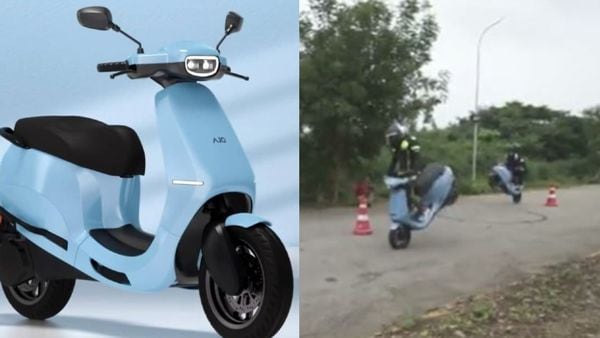 Sharing the video on his Twitter handle on Sunday, Aggarwal wrote, “Having some fun with the scooter!" He also gave an update about the upcoming test rides of the Ola Electric scooters as well as their deliveries. “Test rides begin in the coming week and first deliveries begin soon after," he wrote.

Though there is still no specific date available for the beginning of the scooters' delivery date, the company will begin test rides from November 10. The company had commenced the first sale process of its electric scooter in September, after launching it on August 15. The company will commence the new purchase window on December 16 as it is currently 'busy fulfilling existing orders’ that it has received so far in an ‘unprecedented demand’ for its scooters.

Having some fun with the scooter!

The Ola Electric scooter is available in two trims - S1 and S1 Pro. While the former comes with a 2.98 kWh battery pack, the latter gets a larger battery pack of 3.97kWh. Ola S1 has been priced at ₹one lakh and gets a claimed range of around 120 kms on single charge. Ola S1 Pro has been priced at ₹1.30 lakh and gets a claimed ranged of 180 kms on single charge. The price of the e-scooter is ex showroom and will vary from state to state depending on subsidies on offer.

Ola Electric is manufacturing its electric scooters at its Futurefactory near Chennai in Tamil Nadu. It recently launched its first Hypercharger at the premises. The company had earlier announced that it will set up charging support for its customers under its Hypercharger setup that will be installed in over 100,000 locations/touchpoints across 400 Indian cities.