A video posted on YouTube shows a three-row vehicle making an almost impossible U-turn on a tricky and narrow hilly lane.
By : HT Auto Desk
| Updated on: 24 Jan 2022, 02:32 PM 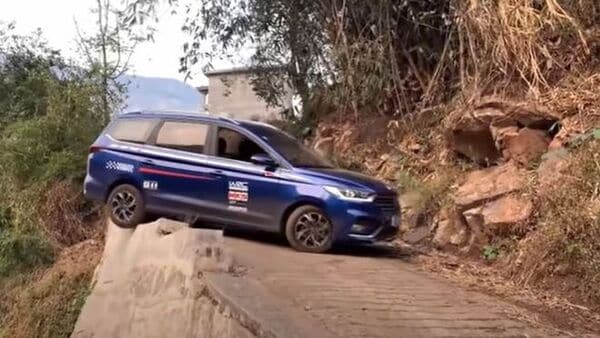 Screengrab of a video posted on YouTube shows a driver making a U-turn on a narrow hilly lane.

Driving in hilly regions is very risky and requires a lot of skill and confidence as the roads are very narrow. There often isn't enough space even for two vehicles to pass each other or drive side by side. Undoubtedly, a person's driving skills are tested to the core while driving on such narrow lanes and one such video has surfaced on social media.

The video posted on YouTube shows a three-row vehicle making an almost impossible U-turn on a tricky and narrow hilly lane. The one-minute and 30-second long video shows how skillful the person driving the vehicle is as s/he manages to pull off the U-turn successfully, without causing any damage to the exterior of the car.

While watching the video, there are some moments where one gets scared as one tyre of the vehicle crosses the boundary of the lane at times and is almost hanging in air but the skilled driver makes sure that the tyre doesn't completely hang in the air or lose contact with the surface.

The video shows that the talented driver starts by reversing the car at a certain angle in a very slow speed. He then tries to to align the vehicle 90 degrees which is achieved after a lot of back and forth. A combination of good calibration of throttle and braking is the key here. The driver then starts steering to right side, again with gentle throttle inputs.

The driver manages to manoeuvre the vehicle in the right direction and turn it in the opposite direction. Another notable thing is that the driver doesn't stop for even a second and s/he constantly keeps steering the vehicle while making the U-turn. This could possibly mean that this is not the first time the person is making a U-turn on a hilly path.