Three days of risky rescue efforts finally resulted in the precariously dangling truck being pulled back on the road.
By : HT Auto Desk
| Updated on: 07 Jan 2022, 11:16 AM 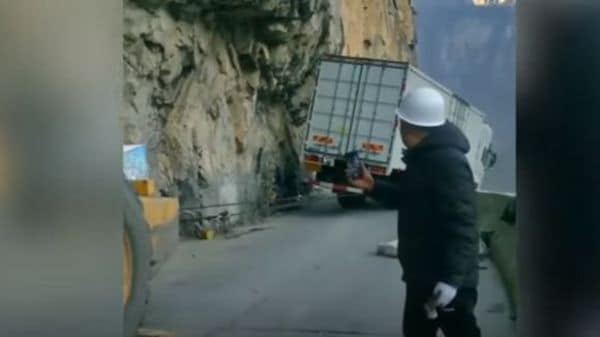 It took three days and several heavy vehicles to pull the truck back on the carriageway.  (Screenshot from video posted on Youtube by CGTN)

In yet another example of why technological advancements ought not to be trusted blindly, a truck driver had a narrow escape when his vehicle took a wrong and narrow road in a mountainous region in China after it was reportedly suggested by the GPS device with him. By the time the driver realized that this rather scenic route wasn't meant for vehicles that are as large as the one he was in control off, it was a bit late for a U-turn.

Reports highlight that the front section of the truck slipped off the narrow road near Changzhi City in China's  Shanxi province on the first day of the new year. UK's The Mirror cites local reports as saying that it had been snowing in the region previously and this had led to the ground conditions being rather treacherous. But for a truck, this was perhaps never really the recommended route anyway. A separate report states that once the driver realized he couldn't possibly drive further, he is believed to have started reversing the vehicle as a full about turn was obviously not possible. That is when the risk increased manifold and a major part of the truck went over the tarmac.

The driver did manage to get out of the vehicle but images from the scene reveal a scary sight. Half of the right side of the vehicle was dangling precariously over the edge before rescue teams reached the spot. While a massive traffic snarl was one part of the worry, the real concern was how to rescue the stuck truck itself. Local reports suggest it took as many as three days for men and rescue vehicles to pull the truck back using re-enforced steel wires.

While all is well that ends well, this tale could well have had a very unfortunate alternate end as well.